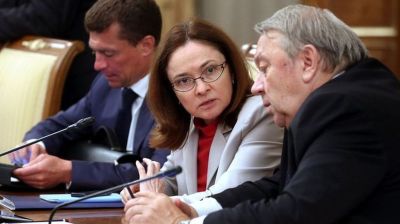 A purge of Russia's financial sector is accelerating as the central bank takes down bigger targets and gets more powers to track down and prosecute blacklisted bankers guilty of money laundering and asset stripping.

Sweeping away crooked and weak banks from Russia's Baltic exclave of Kaliningrad to Vladivostok in the Far East, and from Arctic Murmansk to Dagestan in the Caucasus, is already paying off by improving lending practices, reducing corruption and increasing transparency.

In the two years to January 2016, the number of banks in Russia was slashed by 20% to 596 from 733. The trend is accelerating this year and the targets are getting bigger with the stripping of licenses belonging to Vneshprombank, the nation’s 37th largest and Intercommerz bank, the 67th biggest, in the past four weeks.

The clean-up led by Elvira Nabiullina, the governor of the Central Bank of Russia (CBR), is possibly the most radical thing to happen to Russia's economy since shock therapy. Her predecessor Sergei Ignatiev only paid lip-service to cleansing and consolidating the financial system, while Andrei Kozlov, the last central banker who seriously tried to tackle corruption, was shot dead in 2006.

Nabiullina insists she has no target number in mind, but analysts guess the regulator is seeking the closure of a further 400 banks, which would leave about 200 standing. "She's undertaking a McCarthyite purge of the banks," a senior banker at a mid-sized Moscow lender tells bne IntelliNews. "Her personnel at the CBR have developed a crusading zeal for their work and all my colleagues start freaking out whenever rumours start circulating about a possible proverka [inspection] in our offices."

The CBR has compiled a blacklist of over 4,700 bankers who have been banned from the industry after violating rules. The regulator is now trying to expand the blacklist to include the banks' shareholders and auditors who sign off on false disclosures. Bankers who try to circumvent prohibitions by becoming advisers or assistants will also be targeted.

The CBR is also seeking new powers and may soon be able demand information and documents not only from other banks and public authorities, but also from companies.

Corruption in the financial sector is characteristic of a wider Russia business culture of stealing, shaking down, embezzling, blackmailing, kickbacks and bribing. The CBR has belatedly decided to act and is acting decisively, but the state is being left to pick up the tab. While many former owners luxuriate in political asylum in London, that tab has already run to RUB2.5 trillion ($33.6bn), Standard & Poor's estimates.

"Corruption in the banking sector isn't the worst in Russia," Oleg Kouzmin, chief economist at Renaissance Capital and a former Central Bank adviser, tells bne IntelliNews in an interview. "I think the CBR is the most efficient institution in Russia and it's doing its job better than other regulators, and that why we seeing a stream of negative news coming about the banks."

Vladimir Putin's government committed RUB1 trillion to support the capital of the banks. But the estimated RUB2.5 trillion that so far had to be covered by the Deposit Insurance Agency (DIA), which guarantees savings of up to RUB1.4mn and provides loans to banks to rescue troubled lenders, is just the start of that bill. In a report late last year, S&P speculates the state will have to somehow come up with another RUB 2.5 trillion this year, as well as plug a gaping hole in the 2016 budget.

The DIA has already prevented bank closures from spiraling into bank runs, with the agency having to come up with several bumper payouts in the past nine months. Depositors who lost their money when Intercommerz had its license stripped on February 8 will be paid RUB64.3bn ($855mn) after a huge hole was discovered in the bank's capital position. The DIA is also paying out RUB45bn to rescue depositors burned by the collapse of Vneshprombank in January, plus RUB57bn for Rossiyskiy Kredit in July.

Many of Vneshprombank's depositors were civil servants and politicians, including deputy Prime Minister Dmitry Kozak and Defence Minister Sergei Shoigu, while its corporate clients numbered state-controlled companies such as Rosneft, Rosneftegaz and Transneft. Larissa Markus, the bank's president, has been arrested on suspicion of fraud. Her lawyer has said there is no evidence she engaged in criminal activity.

National Bank Trust, which used Hollywood hard-man Bruce Willis for its advertising campaign, was placed under the agency's management a little more than a year ago, while Bank Otkritie was selected to oversee a RUB127bn bailout.

Former managers of Trust Bank have been charged with fraud for allegedly spiriting millions of dollars away through offshore companies, but the main shareholder Ilya Yurov is believed to be far from the arm of the law in the UK.

Another banker, Sergei Pugachev, nicknamed "Putin's banker", was sentenced to two years in prison at the High Court of Justice in London on February 12 after being found guilty of contempt. The former ally of Putin fled to France last year claiming that his life was in danger in the UK because someone was planning to murder him, and that he was the subject of a witch-hunt by the Russian authorities.

The DIA brought the case against Pugachev after his bank Mezhprombank went bust in 2010, owing hundreds of millions of dollars. The DIA said that having transferred large sums from his company to an account at a private bank in Switzerland, Pugachev was "vicariously liable" for the collapse of Mezhprombank.

Even having Igor Putin, a cousin of President Putin, on the board of directors could not save Master Bank. The lender's license was revoked in November 2013 with the CBR alleging the bank had violated money-laundering legislation and processed large suspicious transactions. The bank required a bailout of RUB31.3bn at the time. Boris Bulochnik, who was also believed to be the main shareholder, has not been charged over the bankruptcy and is reported to be living in Israel.

The DIA is running out of money after waves of rescues and bankruptcies. Nabiullina agreed in October to lend the agency RUB20bn to replenish its reserves after it admitted that it was "close to its mandatory minimum" in reserves of RUB40bn.

Reputable Western lenders haven't escaped the regulator's gaze either. Two offices in St Petersburg belonging to Austria's Raffeisen Bank were searched on February 18 as part of an investigation into illegal activity of its clients, according to news service Fontanka.ru. Raiffeisen said it is cooperating with law enforcement officials and providing assistance on locating the necessary documentation.

On February 18, five former senior staff of Probusinessbank were detained on charges of embezzlement and withdrawal abroad of RUB 2.5bn, according to TASS news agency, citing a source in law enforcement. The license of the bank was withdrawn in August last year after the CBR discovered asset striping and suspicious lending practises.

The drop in commodity prices and the gradual effects of EU and US sanctions imposed over Russia's interference in the Ukraine conflict has triggered a recession and exposed deficiencies in the banking sector. Moody's estimates that problem loans have shot up to 15% of the total from 9.5% a year ago, but some consumer lenders are reporting bad loans in excess of 30%.

The economic crisis has helped the regulator to accelerate its clean-up of the banking sector but most analysts would be shocked if the spotlight is turned on state-owned lenders, where there are similar problems.

Putin removed the head of Russia's ailing state development bank VEB, Vladimir Dmitriev, on February 18 after its bailout needs rose to $16bn. However, it's high unlikely that the bank will be shut down or that its officials will be prosecuted for mismanagement. "VEB is too state-related to fail and it will be a different world if it comes true one day [that] the central bank looks at the state-controlled lenders," RenCap's Kouzmin says.

Nabiullina has vowed that the CBR will continue tightening its control over the banking sector. As part of her campaign, the regulator is also clamping down on rogue insurance companies and drawing up a register for microfinance firms. "This is not a cleansing effort," she said late last year. "This is an effort to make the banking sector viable and get rid of weak players."