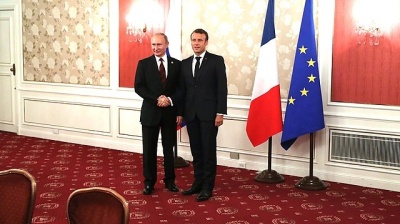 French President Emmanuel Macron has been instrumental in a series of diplomatic breakthroughs in the Ukraine crisis. The latest achievement was getting his Russian and American counterparts to agree on a summit "in principle". / Image: Presidential Press Office via Wiki Commons.
By Theo Normanton in Moscow February 21, 2022

Presidents Biden and Putin have agreed on “the principle” of meeting in person to discuss Ukraine. The potential summit was set up by French President Emmanuel Macron, who has gone to great lengths in recent weeks to negotiate peace in Ukraine.

The news comes as American media outlets report that Russia has completed the final preparations for an invasion of Ukraine. America has been issuing such warnings for weeks now, probably in the expectation that Russia will be less likely to go ahead with an invasion if it has been predicted by the US government.

But some American media outlets are now reporting that Russian commanders have now received their orders, and are making "specific plans" for an attack. In spite of these allegations, though, diplomatic efforts are continuing in earnest.

Following a spate of phone calls between the presidents of France and Russia on Sunday, the Elysée Palace has announced that both President Biden and President Putin have provisionally agreed to a summit. The White House said in a statement that the summit would only take place “if an invasion hasn’t happened”. Dmitriy Peskov, spokesperson for the Kremlin, said that although Putin and Biden could arrange to talk whenever they felt it necessary, it was nonetheless "premature to talk about specific plans" for a summit.

But over the weekend, Russia conducted military exercises with Belarus, including testing ballistic missiles. The two countries then announced that 30,000 Russian troops would remain in Belarus (north of Ukraine) indefinitely, leading to an escalation in the tensions between Ukraine and Russia.

After a volley of phone calls with his Russian and American counterparts (including three hours talking to Putin), Macron got both sides to agree to a meeting. The Elysée Palace released a statement on Sunday saying that “a summit on security and strategic stability in Europe could take place between President Biden and President Putin, and then with all the concerned parties.”

The Elysée clarified that the agenda of such a summit would be determined at the meeting of Lavrov and Blinken this week. It did not expand on which leaders might be present at such a summit.

Ukraine's Foreign Minister, Dmytro Kuleba, was optimistic about the French proposals. “We welcome this initiative. We believe that every effort aimed at a diplomatic solution is worth trying,” Kuleba said before a meeting with his EU counterparts. “We hope the two presidents will walk out from the room with an agreement about Russia withdrawing its forces from Ukraine.”

White House Press Secretary Jen Psaki commented “We are always ready for diplomacy. We are also ready to impose swift and severe consequences should Russia instead choose war.”

The American government has been warning of an imminent Russian invasion for two weeks. President Biden went so far as to say that he was “convinced” Putin has already resolved upon war.

Most recently, the US government sent a letter to the United Nations High Commissioner for Human Rights, claiming to have “credible evidence” that Russia has drawn up a list of Ukrainian citizens whom it wishes to capture or kill.

The letter, which was signed by the US ambassador to the United Nations, also said: “We also have credible information that Russian forces will likely use lethal measures to disperse peaceful protests or otherwise counter peaceful exercises of perceived resistance from civilian populations.” The letter is not publicly available, but was seen by Reuters on Sunday.

With American reports numbering the Russian troops on the border with Ukraine at 190,000, tensions are at an all-time high. But Russia insists that it is not planning an invasion, a stance reiterated by Foreign Minister Sergei Lavrov over the weekend.

The statement by the Elysée says that both leaders agreed on “the need to favour a diplomatic solution to the ongoing crisis and to do everything to achieve one”. Consequently, it said, “intense diplomatic work will take place in the coming days”, including a series of consultations in Paris.

France also said that Putin had also agreed to a meeting on Monday between Russia, Ukraine and the Organization for Security and Co-operation in Europe (OSCE) to discuss observation of the ceasefire on the 500-km “contact line” in eastern Ukraine.

This is the latest of a series of diplomatic breakthroughs initiated by French President Emmanuel Macron. President Putin, who appears to favour bilateral negotiations rather than summits, seems to be particularly willing to talk to Macron, although both leaders have recognised that they view the situation in the Donbas region of Ukraine differently. Macron is facing domestic elections in France in April, and analysts have suggested that independent negotiations with foreign powers may be part of his political strategy to be seen as a world statesman in the lead-up to voting.