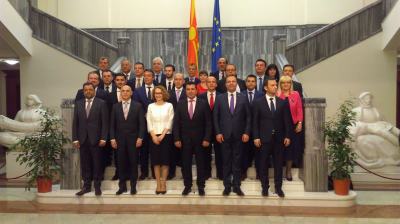 By Valentina Dimitrievska in Skopje June 1, 2017

The Macedonian parliament endorsed the new government led by Prime Minister Zoran Zaev, leader of the centre-left Social Democratic Union of Macedonia (SDSM), in a vote ten minutes before midnight on May 31, bringing an end to the political impasse that had threatened the stability of this ethnically fractured Balkan state.

The SDSM is now back in power after more than a decade of rule (since 2006) by the conservative VMRO-DPMNE party, whose government was toppled following the wiretapping scandal in 2015 that revealed crime and corruption by senior party officials.

The new government was approved with 62 votes in favour, 44 against and five abstentions, following two days of lengthy debates, according to live broadcasts by state-run MRT.

Following the vote, Zaev and his ministers were officially sworn in.

The new government will be composed of three parties, the SDSM and two parties representing the ethnic Albanian minority: the Democratic Union for Integration (DUI), a former partner of VMRO-DPMNE in the previous government, and the Alliance for Albanians. The three parties have a slim majority of 62 MPs in the 120-seat parliament.

The government consists of 25 ministers, of which seven are without portfolio.

Previously, another ethnic Albanian party, Besa, decided not to participate in the new government, saying it had decided to stay in opposition because Zaev was “not willing to accept the principles for joint governance with Besa and to sign an agreement on that”.

One of Besa’s key demands was for redefining the state of Macedonia, but this was unacceptable for the SDSM, which was being prevented by the president from forming a government over concerns it was agreeing to the breakup of the former Yugoslav state along ethnic lines. Besa also blamed the SDSM for allowing the DUI to appoint “corrupt ministers”.

Zaev, 42, economist and former mayor of the eastern town of Strumica, promised while presenting the government programme a day earlier, that the new government would work to improve the economy, aiming for stronger growth and more jobs, to make institutions more professional and bring the country into the EU and Nato.

The government will be also devoted to the implementation of urgent reform priorities as part of the EU-mediated Przino agreement, reached in 2015 to overcome the country’s political crisis.

Key appointments in the new cabinet are: Defence Minister Radmila Sekerinska, former vice prime minister for EU affairs in the period 2002-2006; Interior Minister Oliver Spasovski, who was also interim interior minister in the transitional government (2015-2016); Foreign Minister Nikola Dimitrov, a former negotiator with Greece and a diplomat; and Finance Minister Dragan Tevdovski, a professor at the Faculty of Economics in Skopje.

VMRO-DPMNE and President Gjorge Ivanov feared that the platform would lead to the federalisation of the country, and Ivanov repeatedly refused to give a mandate to the SDSM. However the president was assured by Zaev that the country’s unitary character would be maintained after receiving written guarantees and eventually handed over the mandate in mid-May.

DUI leader Ali Ahmeti has also said that only parts of the platform, which relate to EU and Nato integration, will be incorporated in the new government programme.

However, during the debate in the parliament, DUI MPs said that other parts of the platform, like extended use of the Albanian language and allocation of budget funds to areas with ethnic Albanians, are also part of the government programme. This is likely to lead to further clashes with the professional in future.

VMRO-DPMNE leader and ex-PM Nikola Gruevski said during the debate that his government made huge reforms during the last decade and achieved fabulous results, but blamed “foreign factors” that he claimed worked against VMRO-DPMNE and brought it into opposition, even though the party narrowly won the last December election.