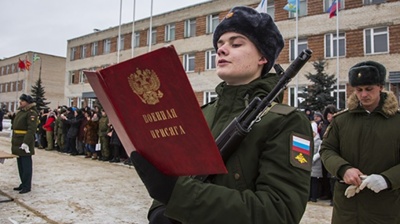 Kyrgyzstan and Uzbekistan have warned their citizens not to sign up for participation in Russia’s war in Ukraine.

Amid Russian leader Vladimir Putin’s escalation of the war with a partial mobilisation, Moscow passed a decree guaranteeing Russian citizenship to foreigners who enter into a contract with the Russian armed forces. The official warnings from Bishkek and Tashkent followed. Kazakhstan did not issue a warning, but it has since 2014 been detaining people who have allegedly taken part in the Russia-Ukraine conflict on either side. Tajikistan has lately shown a growing closeness to the Kremlin—such as in the extradition by Russia of anti-regime Tajiks wanted by Dushanbe—while Turkmenistan rarely makes statements in relation to sensitive international affairs, claiming neutrality, though regarded as close to Moscow.

On September 20, Moscow mayor Sergei Sobyanin opened a military recruitment centre for foreign citizens at Sakharovo migration centre in the Russian capital’s suburbs. The move was widely regarded as an attempt at attracting Central Asian migrant workers into the Russian armed forces to fight in Ukraine.

Of the five ‘stans’, Kyrgyzstan, Uzbekistan and Tajikistan are known for having major migrant labour forces in Russia. According to Russian government statistics, Russia in 2021 was hosting 4.5m workers from Uzbekistan, 2.4m from Tajikistan and 920,000 from Kyrgyzstan.

Looking at the standpoints of the Central Asian nations as regards the war in Ukraine, Kazakhstan and Uzbekistan have shown the most obvious reluctance to relay any sympathy for Russia’s decision to mount an armed conflict to seize Ukrainian territory.

Russia has military bases in both Kyrgyzstan and Tajikistan, with the latter most important to the Kremlin’s attempts to prevent instability from destabilised Afghanistan spreading northwards. According to media investigations conducted by RFE/RL, Russia, amid mounting losses on the battlefield, has, however, transferred hundreds, and possibly thousands, of troops from its Kyrgyz and Tajik bases to fight in Ukraine.

Kazakhstan will hold a snap presidential election on November 20. The question of how close Kazakhstan should be to Russia, China and the West, respectively, looks set to be a major campaign issue. Since Russia invaded Ukraine in late February, there have been several instances of Russian nationalists suggesting that Moscow should think about claiming territories in northern Kazakhstan, where there are substantial ethnic Russian populations.

Ukraine anti-corruption officers raid home of Kolomoisky
1 hour ago
Bulgaria starts construction of gas link with Serbia
10 hours ago
RBI's 2022 profits soar to €3.6bn, with Russian operations representing more than half
1 day ago
Hawkish Iran helped stop larger Azerbaijani attacks says Armenia
1 day ago
Only Hungary and Russia heading for recession in 2023 as Emerging Europe shows its resilience
1 day ago