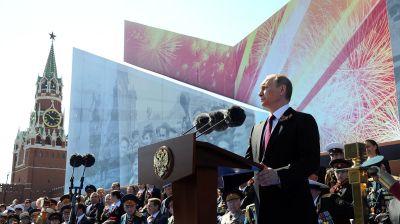 Pride comes amid a fall for Russia's economy.
By bne IntelliNews May 30, 2016

As Russia struggles to revive its limping economy, ex-finance minister Alexei Kudrin has urged President Vladimir Putin to seek international detente to help boost investment and make up a yawning technological gap from the country's competitors.

Kudrin made his call to "ease geopolitical tensions" at the recent meeting of the Presidential Economic Council, Vedomosti reported on May 30, but is said to have been rebutted by Putin, who stressed that Russia "didn't start it", as the newspaper paraphrased him, referring to the stand-off with the West over events in Ukraine.

According to unnamed participants of the meeting, Kudrin, who is chairman of Russia's Centre for Strategic Research and co-head of the Economic Council, described Russia as  "technologically backward".

The country must now integrate itself into international supply chains to narrow the technological gap and could achieve this through reducing tensions, Kudrin said. Participants said he underscored the need to attract foreign investment for economic growth.

Putin responded by saying that while Russia might be behind in some aspects, it has a thousand-year history and won't sell its sovereignty, Vedomosti's sources said. According to another official who took part in the meeting, the president added that foreign companies that have profitable Russian operations won't pull out.

Kudrin was Russia's finance minister from 2000 through 2011. Despite his liberal credentials, he is regarded as having the president's ear in the current bid to restore the economy, which has been hard hit by falling oil prices and EU and EU sanctions imposed on Russia since it seized and annexed Crimea two years ago. The Economic Council was convened on May 25 for the first time in three years to discuss urgent measures to boost growth after the economy  contracted by 3.7% in 2014.

"Economic growth will not resume by itself. The GDP dynamics will hover around zero unless we find new growth points," Putin told the meeting, with a seemingly sincere call for candour in the Russian economy's hour of need: "There is no monopoly on truth in an economically oriented discussion. I'm asking all of you to move beyond ideological preferences, not to be restricted to any theoretical concepts and constructions but to rely on pragmatic approaches and focus on searching for feasible and impersonal solutions," he told participants, according to a Kremlin statement.

They discussed what are the major impediments to growth, with a view to drawing up a plan that will return Russia to at least 4% annual growth within the next five years.

Kudrin's representative and Kremlin spokesman Dmitry Peskov refused to comment on the content of the meeting, Vedomosti reported.