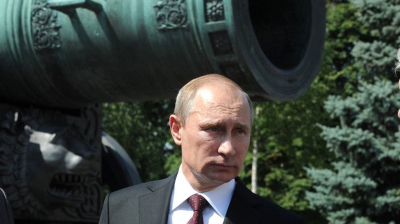 With oil cavorting between $27-$30 a barrel, Russian equities sliding, and the ruble plunging to its lowest value since 1998, the Kremlin is looking rattled despite its comments to calm the mood - or rather because of them.

On January 21, the ruble hit 85 to the US dollar in intraday trading and 91 to the euro, compounding the previous day's collapse that triggered stop orders from traders and headlines such as the Financial Times' "Ruble gets blasted".

"I wouldn't use the word collapse," Kremlin spokesman Dmitry Peskov told reporters, playing down the movements: "The exchange rate is certainly changing, it is volatile, but it is nowhere near collapse," Interfax quoted him as saying.

The Central Bank of Russia (CBR) is monitoring the situation and is ready to act, said Peskov, declining to name the ruble rate that would constitute a collapse: "It is not in my authority - these forecasts should not be voiced from the Kremlin."

CBR head Elvira Nabiullina said the ruble's current value is close to its fundamental value and does not require any extraordinary curbing measures. But indicating frantic backstage activity to contain the situation, Nabiullina cancelled her participation at the World Economic Forum meeting in Davos because of the turmoil.

According to a new economists' survey by RIA Novosti, the CBR is likely to interfere in the currency market should the price of oil decline and remain below $20 per barrel. Speaking at Davos, former Russian finance minister Alexei Kudrin said oil may yet fall briefly to an absolute low of $16-18.

Meanwhile, the oil and ruble storm was uncomfortably framed by public inquiry findings in London accusing Russian President Vladimir Putin of having approved the murder in 2006 of FSB defector and Kremlin critic Alexander Litvinenko. The Foreign Ministry in Moscow said it must still study the document but regretted that the inquiry had been "politicised".

"[The findings] will likely undermine near term prospects for sanctions reduction on Russia - there had been hopes for that with the Russians seemingly looking for 'deals' in Ukraine," Nomura International strategist Tim Ash commented.

Russian equities were also hard hit by the January 20 "Black Wednesday", with the RTS and MICEX indices losing  4.8% and 0.9% d/d respectively.

The sharpest fall was in the banking sector, with shares of Russia's two largest state-controlled banks VTB and Sberbank tumbling 7.7% and 7.2%.

The banking sector is on high alert amid sharp ruble devaluation, and after banks appealed to the CBR to prolong discounted currency exchange rates used for calculating capital adequacy requirements, so as not to undermine capital sufficiency across the sector. Nabiullina reportedly pulled out of Davos to discuss this issue with banking leaders.

Ultimately, "the global, cross-asset selloff is likely to be again the main driver of Russian stocks", Alfa Bank commented on January 21.

Sberbank CIB analysts said there was no positive news to halt the oil price drop, while "a glut of supply amid the global producers' market share war (and now with Iran rejoining the club), cuts in demand forecasts because of slowdowns in the Chinese and other economies, and expectations of a stronger dollar" continue to drive the downward pricing.

Yet on January 22, futures contracts costs of Brent crude for delivery in March exceeded $30 on London's ICE. Barely heartened, the ruble started the day at 83.59 to the dollar.

Strategist Ash cited a "notable disconnect ... between the ruble and oil, and the former seems to have developed its own distinct weakening trend. I think the Russian authorities have hitherto been trying to manage the ruble weaker, to insulate the economy and budget from lower oil prices". However, "the ruble move is beginning to look worrying - herein we have these [Kremlin] attempts to verbally intervene in support of the currency", Ash added.

The Belarusian ruble also reached a new record low on January 21, losing 13.9% of its value since January 1, since the neighbour state's economy is heavily dependent on its key trading partner Russia.

Nevertheless, weighty voices still remained bullish on Russia. On January 20, Sergei Strigo, the London-based head of emerging-market debt and currencies at Amundi Asset Management that oversees $1 trillion, told Bloomberg he has an overweight position on Russian assets. The fund believes that other traders overlook the positives that favour the country, such as improving growth and an economy awash in hard-currency export earnings.

"We believe the fundamentals in Russia are solid. A growth rebound in 2016, current account dynamics, manageable fiscal deficit and abundant local liquidity support our positive view on the country," Strigo said.