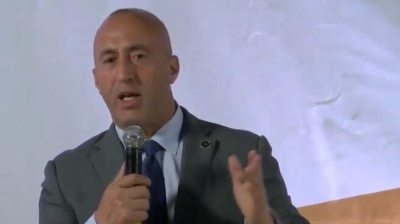 Former Kosovan prime minister and leader of the Alliance for the Future of Kosovo (AAK), Ramush Haradinaj. / AAK
By Valentina Dimitrievska in Skopje November 8, 2022

Ex-prime minister Ramush Haradinaj said on November 8 that PM Albin Kurti should not break relations with Kosovo’s main ally, the US, by rejecting Washington's demand to delay the re-registration of Serbian cars, which has led to mass protests and unrest in the Serb-dominated north.

Kurti met with opposition leaders to discuss the situation in northern Kosovo, where the situation has escalated after Serbs there decided to abandon the state institutions where they work in protest against the authorities’ insistence on continuing with re-registration of cars with Serbian plates.

“Even though I was part of the meeting with PM Kurti, I was forced to leave because Kurti was giving lectures and did not explain why he broke relations with the US and why he is not fulfilling their request,” Haradinaj said in a Facebook post.

“For me, it is unacceptable that in such sensitive cases, that we are breaking relations with our main security ally,” he added.

On November 2, US ambassador to Kosovo Jeff Hovenier urged Kosovo to extend the deadline.

“We reiterate our request for a full extension of the implementation period so that RKS plates can be installed over the course of 12 months while affirming that Kosovo has the right to implement this change,” Hovenier said.

However, Kurti decided not to postpone the implementation of the decision on re-registration of cars with Serbian number plates for one year as requested by the US.

“There will no postponement as the government is only implementing the law," Kurti said.

Head of the PDK Memli Krasniqi said after the meeting with Kurti that he is not sure that Kosovo’s government knows how to keep the situation in the country’s north under control, N1 Serbia reported.

According to Krasniqi, the situation could have been avoided.

"It seems that the immaturity in some actions and the lack of coordination with Kosovo's main allies brought about a situation that could have been avoided," Krasniqi said.

Nato secretary general Jens Stoltenberg urged Serbia and Kosovo on November 7 to refrain from any unilateral actions that would trigger an escalation in northern Kosovo.

The standoff between Pristina and Belgrade is taking place in the context of the war in Ukraine. There have been warnings since Russia invaded Ukraine in February that it could also try to destabilise the Western Balkans. Russia backs Serbia in its refusal to recognise Kosovo as an independent state.

On November 7, the Russian foreign ministry weighed in, accusing Pristina of deliberately contributing to the escalation of tensions.

“Without actually taking any effective steps to put an end to the provocations on the part of Kosovo Albanian radicals, the Westerners are openly pushing the situation towards a direct conflict,” the ministry said on Facebook.