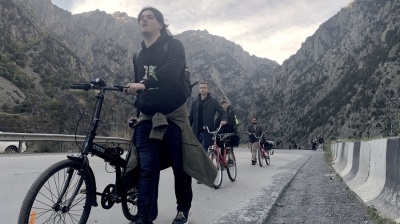 Some Russians literally got on their bikes to exit Russia when Vladimir Putin announced his mobilisation. / bne IntelliNews
By bne IntelIiNews January 18, 2023

Kazakhstan is to no longer permit Russian citizens to use the “three-month visa run” loophole to stay in the country indefinitely.

Last year, particularly following Vladimir Putin’s autumn mobilisation for the armed forces, tens of thousands of Russian men—or even hundreds of thousands, according to some statistics—fled their homeland to relocate to Kazakhstan. As the number of Russians escaping the draft for the Ukraine war swelled, Kazakh President Kassym-Jomart Tokayev declared: "We must take care of them and ensure their safety. This is a political and humanitarian matter." However, the influx of Russians has contributed to skyrocketing inflation in Kazakhstan, while causing tensions and anxieties among the big majority of Kazakhs who are opposed to Putin’s conflict.

Starting from January 26 under a government resolution, the practice possible under migration legislation that allows an indefinite stay will be disallowed. Russians along with citizens of other members of the Moscow-led Eurasian Economic Union (EEU) will have to depart Kazakhstan for a period of at least 90 days following a permitted three-month stay.

The loophole effectively allowed some foreigners to live in Kazakhstan without registering with the migration authorities. Some have made use of the opportunity to work in the shadow economy.

Under EEU free trade bloc provisions, citizens of Russia theoretically enjoy freedom of movement in Kazakhstan and the right to live and settle in the country. However, both Russia and Kazakhstan restrict to 90 days the length of time citizens of fellow EEU member states can be in the country without an official reason, such as employment or study. Thus Russians intent on indefinite stays in Kazakhstan—those escaping the call-up for the war are often referred to as “relokanty” by Kazakhs—typically leave for a neighbouring state after 90 days, then return and stay another 90 days, before repeating the whole process again.

The change will mean most Russians who have fled the draft can only now remain in Kazakhstan for 90 days out of each 180, as KazTAG news agency has reported. A few lucky enough to find a job with an employment contract or able to qualify for an uninterrupted stay under another official reason—such as study, medical treatment or family reunification—will escape the closing of the loophole.

The ending of the visa-run approach will of course affect citizens of the other EEU states, namely Armenia, Belarus and Kyrgyzstan. Kyrgyz migrant workers in particular have used the loophole to work unofficially in Kazakhstan.

There is now the prospect of Kyrgyzstan moving ahead of Kazakhstan as the preferred choice in Central Asia for many Russians determined to stay away from their homeland. As things stand, there are no time limits on how long Russian citizens can stay in the country.