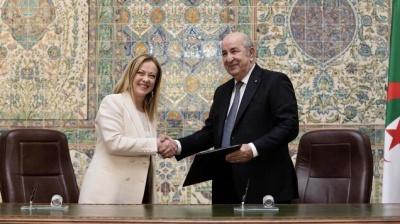 Italian PM visited Algiers, where she was greeted by her Algerian counterpart, President Aimene Benabderrahmane / ANSA
By Marco Cacciati in Berlin January 25, 2023

The visit’s main goal was to consolidate diplomatic and commercial ties and secure a contract for increased gas exports. The details of the deal had, for the most part, been negotiated by Mario Draghi during his previous visits last summer.

The deal, signed with the Algerian state-owned gas company Sonatrach, grants Italy the shipment of further 9bn cubic metres of gas in addition to the supply already flowing through the TransMed pipeline.

This vital infrastructure connects Algeria to Sicily through Tunisia and under the Mediterranean Sea; its expansion has already been planned, aiming to augment the current capacity of 33.5 bcm per year.

However, according to Eni’s CEO Claudio Descalzi, who accompanied Meloni to Algiers, “[The current capacity] is still under-utilised. There are still more than 10 bcm that can reach Italy”.

Speaking at the press conference, Meloni said: “Today Algeria is our first gas supplier. I have witnessed the signing of two agreements between Eni and Sonatrach: a deal to reduce greenhouse gases [GHGs] for sustainable development, and a second landmark deal to further increase Algerian gas supplies to Italy (and therefore the EU), plus the planning of a new pipeline to transport hydrogen and enable Algeria to produce LNG. In sum, a promising energy mix that could shield Italy from the ongoing energy crisis”.

Algeria has quickly become Italy’s top gas supplier and has proved to be a reliable partner to help Rome wean itself off Russian gas, which last year accounted for nearly 40% of the country’s imports – making Italy the second major EU economy most reliant on Russian gas after Germany.

Algeria already supplied around 30% of Italy's natural gas needs in 2021, before Russia’s invasion of Ukraine. It currently makes up 38% of the country's imports. The new deal is a step forward in Rome's co-operation with Algiers, and reflects Italy's ambition to become a transit hub for African gas to be transported further north to other EU countries.

"We want Italy to become a European hub for Algerian gas. A junction for other EU countries," said Algeria’s ambassador to Rome, Abdelkrim Touahria, who was present at the event.

However, in order to do so, Italy will have to consistently expand its domestic gas network and build new energy corridors to Germany, Austria and Switzerland.

On the sidelines of the official visit, Meloni and the Algerian Prime Minister, Abdelmadjid Tebboune, visited a garden in Algiers dedicated to Enrico Mattei, the founder of the Italian energy company Eni, who supported Algeria in its independence fight with France in the 1950s and early 1960s.

Meloni announced last December that her government’s new plan for Africa would be named “Piano Mattei”, after the entrepreneur who perished in a mysterious plane crash in 1962. Meloni has repeatedly declared that one of her priorities is to reaffirm Italy’s leading role in the Mediterranean – not least to improve stability and security in North African countries in order to stem the flow of illegal migrants attempting to reach Sicilian shores.

Mattei’s figure is almost revered in Algeria and still highly praised in Italy. His policies towards Africa were regarded as unusually fair in the 1960s, when he offered Algeria and Tunisia a 50-50 partnership for extracting their oil – as opposed to the American and British oil giants, which granted African countries much lower margins at the time.