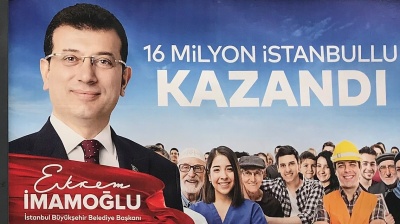 A billboard advert celebrating Imamoglu's victory in the first vote this year for Istanbul mayor. Officials scapped the result, but he went on to win a much bigger victory in the subsequent 'revote' in a test of Turkey's democracy.
By bne IntelliNews August 28, 2019

Ekrem Imamoglu, the opposition politician who this year twice defeated a ruling party candidate as he won and then ‘re-won’ the Istanbul mayorship, has scrapped the transfer of more than Turkish lira (TRY) 350mn ($60.1mn) to some pro-Erdogan administration foundations.

The move is seen as one of Imamoglu’s first actions in defiance of Turkish President Recep Tayyip Erdogan since he resoundingly won the late June Istanbul ‘revote’—the contest ordered by election officials after complaints from strongman Erdogan and his Justice and Development (AKP) party that Imamoglu’s triumph in the March 31 local elections was marred by irregularities at polling stations.

When Imamoglu was made mayor it ended a 25-year era during which cultural and commercial capital Istanbul was controlled by the AKP or its predecessor parties, and it also opened up speculation as to whether the victor might eventually prove to be a politician who could dislodge Erdogan from the presidency. There are even said to be machinations within the AKP right now as former Erdogan loyalists ponder whether they can exploit Erdogan’s new vulnerability by forming a new party.

As part of his election campaign, Imamoglu, a member of the main opposition Republican People’s Party (CHP), pledged to uncover what he claimed was the wasteful transfer of millions of lira to pro-government foundations by previous Istanbul administrations.

“As of now, we have completed the cancellation of a total of 357 million lira of resources that were given or transferred to foundations,” he told reporters on August 28, according to Reuters. He added that this figure included TRY56mn of “food support” and a TRY165mn for buildings.

The municipality also annulled protocol agreements it had with five foundations receiving transfers.

One of those was the Turkey Youth and Education Service Foundation (TURGEV), which Erdogan founded when he was mayor of Istanbul in the 1990s. Its board includes Erdogan’s daughter, his communication director’s wife, and a former AKP mayor.

The Turkish Youth Foundation (TUGVA), the Ensar Foundation, the Aziz Mahmut Hudayi foundation, and the Daru’l Funun Theology foundation were other foundations that had protocol agreements annulled and fund transfers cancelled.

Last week, Turkish authorities replaced Kurdish mayors in three southeastern cities with government appointees, citing national security concerns, and detained more than 400 people for suspected militant links. Erdogan has said his government would take similar measures in other parts of the country if need be, prompting concerns officials could even act against CHP mayors. Imamoglu responded that such remarks were “saddening” and meaningless.

“Istanbul is in safe hands. Istanbul is being managed by a mayor who received close to 50% of the votes of Istanbulites,” Imamoglu said.