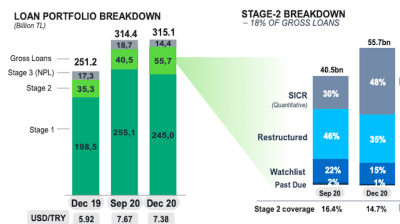 The problem loans burden of Turkey’s Garanti Bank (GARAN) has expanded to Turkish lira (TRY) 70bn ($9.6bn), or 22% of the TRY315bn of loans on the lender’s books, from TRY59bn, or 19%, at end-September, the bank said on January 28 in a presentation of its Q4 financials.

When the TRY4bn write-down is included, the NPLs are seen to stand at TRY18.4bn as of the end of last year, or at 5.8% of loans.

Garanti also noted that “regulatory forbearance” measures made a positive 40bp impact on the NPL ratio, suggesting an actual ratio of 6.2% and a problem loans ratio of 24%.

The bank has delayed (restructured) repayments of TRY40.1bn of loans and has registered 57% of delayed loans as Stage 2 problem loans.

When TRY17bn of unregistered delayed loans are included, the problem loans ratio reaches 29%.

If Garanti’s Spanish parent BBVA withdrew its equity and deposited its money at rival Akbank, it would enjoy much better and also riskless returns.

The situation is same for all the local banks and the lenders have not been allowed to distribute dividends from their 2018 and 2019 profits.

On January 29, banking association TBB said that banking watchdog BDDK has allowed the local banks to distribute 10% of their 2020 profits.

This news will be sold as ultra-positive as Bloomberg has been reporting since November that the BDDK was in discussions about the dividend ban.