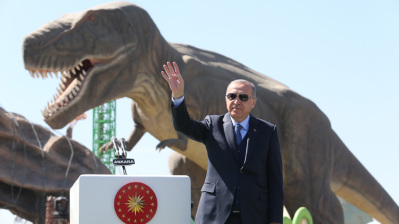 Chapter one: How to spot an incorrigible populist.
By bne IntelliNews March 20, 2019

Stood before a towering model of a Tyrannosaurus dinosaur, Turkish President Tayyip Erdogan on March 20 declared open the latest of a series of giant projects that he’s put to use as part of his ongoing local elections campaign trail. This time round the populist strongman politician inaugurated a giant theme park in Ankara.

Last week, Erdogan was busy opening a mega hospital the size of 100 football pitches in the Turkish capital, while in late October last year, in what might be seen as very early campaigning, the president drew the headlines just outside Istanbul, opening a mega airport that officials are intent on making the busiest airport in the world.

The big hitch to all of this is that on each of these occasions there have been cynical mutterings that the facilities were not even ready for substantial operations, causing critics to say Erdogan is on a ‘Potemkin village’ tour, determined to pull in the votes by ignoring the delays and celebrating each project as a grand triumph.

Ankara is one of the municipalities where Erdogan’s AKP is said to be in particular trouble as it attempts to hold on to the mayorship despite the backdrop of a country plunged into recession with a severely depleted currency, terribly high unemployment, double-digit inflation, a crisis-struck construction sector and severe strains that are emerging in its banking system. Not to mention a president said to have unwisely fuelled the economy with unsustainable credit before unnerving the markets by suggesting that he should have his hands on the levers of monetary policy. With the situation for the AKP in Ankara looking dire, Erdogan has even issued threats over legal action that might catch up with the opposition candidate who is favourite to triumph in the capital.

Ex-mayor shown struck at top of rollercoaster
Construction of the 1.3mn -square-metre park named Ankapark Wonderland Eurasia started nearly six years ago. It was completed last year after expenditure of around Turkish lira (TRY) 1.4bn but until the arrival of Erdogan the park was not opened to the public because of safety fears over some of the rides and games. Melih Gokcek, the former AKP mayor of Ankara, was pictured stuck at the top of a rollercoaster shortly after the park was finished. 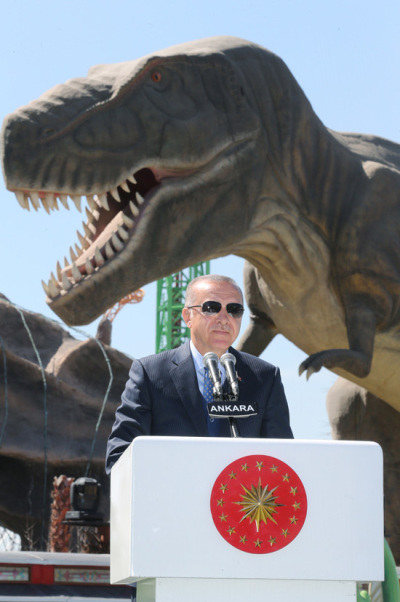 In his speech in front of the model dinosaur and a fountain decorated with cat statues, Erdogan said the park would provide the Ankara municipality with TRY 50mn a year. “Ankapark ... isn’t just a symbol of pride for Ankara, but for all of Turkey,” Erdogan told a gathered crowd of thousands.

The park’s general manager, Cem Uzan, told Reuters that all of its machinery had been procured from “the best producers” in the field and would be subject to routine and special inspections.

The park boasts some 2,117 attractions including 14 rollercoasters. It is targeting 5mn visitors in its first operational year.

Not missing a beat, Erdogan declared that park entrance would be free until election night on March 31.

Meanwhile, fears over the safety of some of the park’s rides have been voiced by the Ankara office of the Union of Chambers of Turkish Engineers and Architects (TMMOB). It said it had examined public photographs of the park which, for instance, showed rust patches had emerged on rollercoasters and other issues at the foundation of other attractions, seemingly caused by the mothballing of the park before its delayed opening.

ISTANBUL BLOG: The Turkish ‘moustaches’ that no one dare singe