ISTANBUL BLOG: Turkey is getting drawn into Syrian quagmire 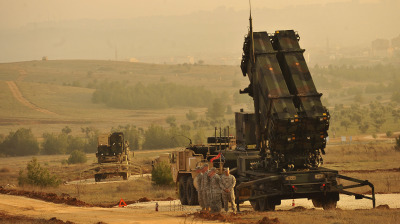 A US Patriot missile battery engaged in the Syrian conflict. / Photo: CC
By bne IntelliNews September 1, 2016

The Turkish incursion into northern Syria is making the situation on the ground more complicated by the day, with Ankara’s Western allies  – especially the US – and major powers in the region – Russia and Iran – becoming anxious over the clashes between the Turkish military and Turkey-backed Free Syrian Army (FSD) with the Syrian Kurds.

The two-prong objectives of the military operation – codenamed Euphrates Shield – that started more than a week ago in the early hours of August 24 is to cleanse Turkey’s border with Syria of Islamic State militants and to stop the advance of the YPG Syrian Kurdish militia.

The US publicly says it is providing air cover for the operation but it wants Turkey to focus only on Islamic State instead of fighting against the Kurds.

Turkey’s domestic politics and foreign diplomacy have become intertwined over the past couple of years, making it more difficult to predict Ankara’s next move in Syria.

It is unknown how long the Turkish military will stay inside Syria. The longer it stays there the higher the chances of getting involved in more confrontations with local forces, even maybe with the Syrian regime itself.

One can easily get lost in the alphabet soup of the Syrian where everybody is fighting with everybody: the PYD, the YPG, the SDF, the FSA, the military councils and so on.

The US is supporting both the moderate opposition groups, the Free Syrian Army (the FSA), against President Bashar al-Assad, and the PYD (Democratic Union Party), which is Ankara’s enemy because of its links to the Kurdistan Workers’ Party (PKK) that launched an insurgency against the Turkish state in 1984.

The operation Euphrates Shield is being carried out in coordination with Syrian opposition forces fighting for the Free Syrian Army (FSA). The FSA with the help of the Turkish military seized the strategic town of Jarablus from Islamic State, near the Turkish border, cutting the jihadist group’s crucial supply line.

The YPG (People’s Self-Defence Forces), the military arm of the PYD, has proved to be the most effective force on the ground in the fight against Islamic State.

The SFD (Syrian Democratic Forces) is an umbrella group, dominated by the PYD/YPG.  It captured the town of Manbij, south of Jarablus.

Syrian Kurds have made significant advances in northern Syria over the past months, capturing swathes of land along the Turkish border from Islamic State.

Turkey apparently wants to establish a buffer zone in northern Syria to prevent the PYD from linking the areas it controls on the east and west banks of the Euphrates River. That’s why it is asking the Kurds to pull back to the east of the Euphrates, a demand the US is also backing.

Turkey will never allow the creation of a Kurdish entity in Syria, Prime Minister Binali Yildirim said on August 26, adding that its forces will stay in Syria until all threats to Turkey’s security are eliminated, signalling no quick end to the military operation in its war-torn neighbour. Ankara fears that an autonomous Kurdish entity inside Syria will embolden the PKK and spark separatist sentiments among Turkey’s own Kurds.

Russia and Iran, two major regional powers, are the closest allies of Syrian President Bashar al-Assad, providing military support to the regime forces. Operation Euphrates Shield was not met with a strong reaction from Moscow, which only expressed its “deep concerns” over what’s happening on the Turkish-Syrian border.

Turkish warplanes had not been able to fly missions inside Syria for months as Russia deployed missiles along the Turkish-Syrian border after Turkey shot down a Russian bomber last November.

Turkey apparently went ahead with the operation with a green light from Russia, otherwise it would have not been possible for Turkish warplanes to hit Islamic State targets in northern Syria. But it remains a question how Russia would react if Turkish-backed forces move westwards towards Aleppo or pushed further down in the south beyond Jarablus.

Iran, which remained largely silent in the first week of the operation, has finally called on Turkey to stop. “The continued military presence of Turkey in the Syrian territories without the Damascus government’s consent will aggravate the situation in the region,” said Iran’s Foreign Ministry on August 31, calling for an immediate halt to the Turkish military operations.

Relations between Turkey and its long-time ally the US have been severely strained after last month’s coup attempt. Vice President Biden visited Ankara to mend ties on the day Turkey launched its major military offensive in Syria, voicing support both for the government and the military operation. But as the operation entered its second week and Turkey turned its guns against the Kurds, Washington has become anxious.

“We want to make clear that we find these clashes unacceptable and a source of deep concern,” Brett McGurk, US President’s special envoy for the global coalition to counter Islamic State, said on August 29. “Accordingly, we call on all armed actors to stand down and take appropriate measures to de-conflict and open channels of communication.”

America’s publicly declared support for the operation was seen by many as a sign that Ankara and Washington may be finally repairing ties: Turkey could have not probably launched this large scale and strategic an operation without coordination with the US.

Moreover, analysts argue that Euphrates Shield proves that Turkey’s rapprochement with Russia did not really mark a radical change in Turkey’s decades-long, pro-West, pro-Nato foreign policy, as some had speculated.

Yes, the normalisation of relations with Russia facilitated the execution of the military operation in northern Syria. Maybe, Erdogan had this operation in mind when he decided to make overtures to Moscow, but breaking ties with the West and Nato was not what he was thinking of. Such a move – a complete overhaul of Turkey’s foreign policy direction -– would create unprecedented and unpredictable results.

Yet recent reports suggest that the US and Turkey remain divided over the Syrian Kurds and problems between the two allies may be far from over. Turkey summoned the American ambassador on August 30 to convey its frustration over top US officials’ comments.

US Secretary of Defence Ash Carter has called for an end to operations against the PYD/YPG and urged Turkey to focus only on Islamic State instead. Joseph Votel, head of US Central Command in the Mideast said: “We did support them [Turkish forces], but we had to withdraw support when it became clear to the US. that the Turkish offensive had aims beyond clearing ISIL fighters from the border.”

Turkey has rejected reports that it has reached a ceasefire with the YPG. “Turkey has no problems with Syria’s Kurds, but we have problems with the terrorist organisations such as the PKK and the PYD,” said President Erdogan’s spokesman Ibrahim Kalin, ruling out a truce with the Syrian Kurdish militia.

The Wall Street Journal has cast doubts even over the presumed cooperation between the two countries in Operation Euphrates Shield, suggesting the US was actually caught off guard. While the White House was preparing to consider a secret plan to have American special forces join the Turks, Ankara pulled the trigger on the mission unilaterally without giving officials in Washington advance warning, according to the newspaper.

The Turks’ decision undercut a behind-the-scenes effort to clear rival Syrian Kurdish elements out of the conflict zone first and created a prickly new challenge for the US, American officials told the Wall Street Journal.

The operation Euphrates Shield started on the day marking the 500th anniversary of the of Battle of Marj Dabiq, when the Ottomans invaded Syria and two days before the inauguration of the third bridge over the Bosporus, named after Yavuz Sultan Selim, the hero of the Marj Dabiq.

The military operation also serves the government’s political agenda at home. This will boost the military’s morale and will help it repair its damaged reputation from last month’s failed coup attempt. The government is enforcing its image as the protector of the country, battling against its internal and external enemies, consolidating its conservative and nationalist supporter base.

Since the operation Euphrates Shield started, the PKK has ramped up its attacks on security forces in the country’s south east, killing scores of soldiers and policemen, underscoring the complexity of the situation and the heightened security challenges for Turkey.

However, the public reaction in Turkey has been rather calm: no mood of panic. This must be because the Turks have seen large-scale incursions into northern Iraq in the past with the military chasing PKK militants there. Even though the Euphrates Shield is different from the past military incursions, people do not think-or feel- that the country is at war but rather see it as one of these incursions against terrorists.

Can Turkey, yet, afford to continue ignoring calls from the US, Russia and Iran to end its offensive on the Syrian Kurds? How long would it be able to carry out this military operation, until when and where will it stop? Is Turkey getting dragged into the Syrian quagmire that it could not get out from easily?

These are the questions everybody is asking but with no clear answers, at least for the moment. But some of these questions could be answered when Erdogan meets with Putin on September 3 and with Barack Obama on September 4 on the sidelines of a G-20 summit in China.