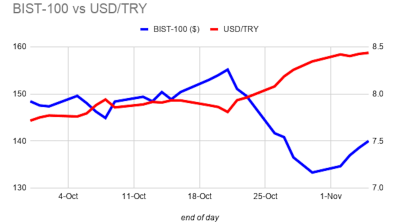 The market value of foreigners’ Borsa Istanbul stock holdings fell to $19.3bn as of October 30, marking the first time it has fallen below $20bn since March 2009, BloombergHT reported on November 5.

The latest surge in the depreciation of the Turkish lira (TRY) is a factor in the sinking value, but also foreigners pulled $117mn from the Borsa Istanbul in the week ending October 30, adding to severe outflows in the year to date.

As of the early hours of November 6, the presidential election “bedlam” in the US was continuing. The Turkish markets have been volatile since November 4, but no sharp turns have been seen as yet.

On November 4, shares in government-run Halkbank (HALKB), which is struggling to fend off a New York indictment for alleged Iran sanctions-busting, rallied on news that suggested US President Donald Trump, whom US media have said has attempted to assist the bank in fighting the case, would hold on to the White House.

However, early on November 6, the election result was still in limbo with challenger Joe Biden showing confidence that he would be declared the winner.

“... Build a Kasimpasa [Turkish President Recep Tayyip Erdogan’s old neighbourhood in Istanbul] in Texas… His hair is blonde like the sun…” The fast transformation of the US into the “Turkey of the Americas” has been fuelling jokes in the original Turkey.

The USD/TRY rate has since November 3 been trading in a new band of 8.40-8.50, while the EUR/TRY rate hit double digits once again on November 5, due to a rise in the EUR/USD pair.

Erdogan for more than a decade has been asserting and reiterating that he is the boss of monetary policy in Turkey. At one point two years ago, in a London interview in a Bloomberg studio, he left no doubt as to whom is in charge. Alas, he has not managed to convince the financial markets that it’s fine for him to treat the central bank as his personal accounting department.

With the ‘Erdoganomic’ economy threatening to collapse all around him, rolling out Albayrak to explain why everything is actually still on track is never a good idea. He appears to talk random-wise about economics and finance which he does not seem to have a good grasp of, perhaps repeating talking points that the geniuses who advise him have recommended.

But there is actually plenty of central bank data that should show him it is time to get real. For instance, some new figures show how the foreign investors’ share in domestic government bonds fell to as low as 3.39% as of October 30.