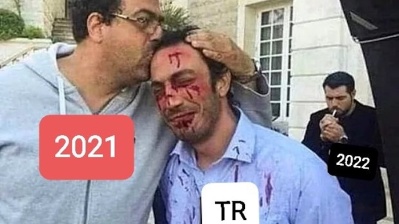 True believers in President Recep Tayyip Erdogan’s “new economic model” may wish to ask themselves why since December 20 Turkey has again been burning wildly through its FX reserves and why despite the announced Erdoganomic state scheme to reimburse depreciation losses on lira deposits there has been no stampede to reverse dollarisation.

Erdogan’s son-in-law Berat Albayrak is the patent-holder of the idea of using currency interventions to place pressure on the USD/TRY rate with the objective of inducing FX-holders into panic sales. When Albayrak became finance minister on July 10, 2018, the USD/TRY rate stood at 4.71. Its latest all-time record low was registered on December 20, 2021 at 18.37.

It was on the evening of December 20 that the Erdogan regime staged a new lira “blockbuster movie”. Following a “cabinet” meeting (the supposed “cabinet” is not actually a cabinet), Erdogan announced the new instrument that guarantees lira deposits against currency depreciation versus hard currencies.

After the announcement of the instrument, a media campaign was launched to portray Erdogan as slaying the USD and citizens as rushing to sell their dollars.

The Treasury has said it will provide a guarantee against lira depreciation to lira deposit holders. At the end of maturity, if the USD/TRY yield is higher, the Treasury will pay the difference.

Banks are able to offer an interest rate between the policy rate of 14% and plus 3pp (17%) for maturities of three, six, nine & 12 months.

Let’s take a 3-month maturity scenario as an example: on December 29, a lira deposit holder turned their TRY100-equivalent deposit into an FX-guaranteed lira deposit with a 17% rate. The central bank’s USD/TRY rate stood at 12 and their money is worth about $8.

By March 29, she has earned 17% interest for three months, meaning her deposit now stands at around TRY104. If the central bank rate is below 13, this is her money as TRY104 would make more than $8. If the central bank rate is above 13, the Treasury will make up the difference to raise the amount to $8. Let’s say the rate is 14. $8 makes TRY112. The Treasury must pay TRY8.

This is what’s called a naked call option. The Treasury sells it at a zero premium. The risk is unlimited as the exchange rate can theoretically soar into infinity.

However, it is unknown whether a significant number of deposit-holders will make use of this instrument. First and foremost, no one in their right mind has any trust in the Erdogan regime. The instrument could even trigger a bank run as the central bank is rumoured to have been taking steps to push returns on FX-linked deposits to negative by increasing required reserves.

Secondly, the interest rate is low. At the end of the maturity, if the government can manage to successfully pressure the USD/TRY, the deposit-holder will earn 17% interest. Official end-2021 inflation is expected to come in at 30%.

Thirdly, if the deposit-holder wants their money back before maturity, the lower of the rates taken from the day of depositing the money and the day of withdrawing the money will be used. So, if we go back to the example above: On January 29, if the central bank’s USD/TRY rate stands at 13, the deposit-holder will receive her money back at the 12 rate.

Meanwhile, the central bank has said it will provide a guarantee against lira depreciation to FX-deposit holders if they turn to FX-guaranteed Turkish lira deposits.

It has also announced that it will provide a guarantee to gold-deposit holders if they turn to local currency deposits.

The chaos surrounding setting the rate, which will be taken into account for the lira depreciation guarantees, continues. On December 31, the central bank said that it would release the base FX and gold rates six times per day.

“It’ll be alright on the night” and “He who thinks on what the end will bring cannot be a hero” are Erdogan regime mottos.

Also worth mentioning is that the central bank is holding TRY-settled FX forward selling auctions for exporters and importers. Previously, the authority held such auctions from November 20, 2017 to December 31, 2018.

The first auction in the new term was held on December 29.

All in all, all roads mean the printing of more and more lira.

The spread over the policy rate (14%) for 10-year domestic government bonds has jumped to a record high of 10pp.

Turkish lira credit and deposit rates at the banks have also boomed.

As of December 24, foreigners’ overall portfolio holdings declined to $34bn (chart below by @atk_1881).