ISTANBUL BLOG: Finally, the market knows what to expect 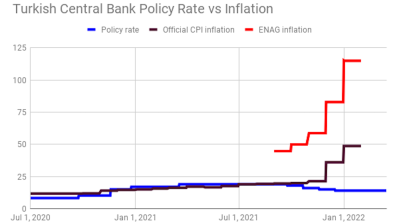 Adjusting for the now plain reality that Turkish President Recep Tayyip Erdogan runs his country’s monetary policy and has no truck with the commonly accepted principle that high inflation should be tackled with interest rate hikes, the market anticipated that the Turkish central bank would on February 17 hold its policy rate at 14% y/y, some 35pp below the official inflation rate of 49%. And the market got it right. The national lender’s monetary policy committee (MPC) did just that.

On February 3, the Turkish Statistical Institute (TUIK/TurkStat) announced the 49% figure for official consumer price index (CPI) inflation in January, but was immediately challenged by the ENAG inflation research group led by Istanbul academics. According to ENAG, inflation in Turkey rose to 115% y/y in January from 83% at end-2021.

Currently, the market and central bank see official inflation peaking at around 55% y/y in May (their forecast reckons without the Turkish lira crashing again).

On March 3, TUIK and ENAG will release their inflation figures for February.

On March 17, the MPC will hold its next rates meeting. Currently, the market expectation is that it will again hold the policy rate.

Turkey’s economic turmoil is self-accomplished. It is a mess that could only be created by a regime stained by amateurism and a palace’s disregard for everyday citizens. Articles attempting to get to grips with the mire are ten-a-penny. Some even treat Erdogan’s so-called new economic strategy as something that might yet prove itself within the realms of economic normality. The writers responsible should cut it out. Please don’t normalise the scandalous economic mismanagement of a tinpot autocrat. Because the reality, the excruciating pain, of doubled prices for hard-pressed tens of millions of Turks does not go away. Attempts to normalise Erdogan’s tenure do not address their hunger issues. And won't.

By now, the regime’s horror show simply repeats itself in ever-diminishing circles. Some of the main characters may change—the central bank chief, for instance, or the finance minister—but all the jokes are played out. Bring back Erdogan’s son-in-law, the bungling, floundering, maladroit former finance minister Berat “PowerPoint” Albayrak, though, and we might still have some fun.

So what do we have, when we put things politely. Turkey’s monetary policy remains inefficient. There is no visible sign of foreign interest in the lira.

Some stabilisation is observed in bank rates following a shift up in December. Net lira creation via loans remains high this month at Turkish lira (TRY) 29bn by February 14.

The capital of the public banks, meanwhile, has been hiked (via the circulating of some government papers among the Treasury, Turkey Wealth Fund (TWF/TVF) and the banks again). The regime has also been talking about pumping some TRY60bn into the economy via the Credit Guarantee Fund (KGF).

Erdogan and his officials can eat TRY60bn worth of loans for breakfast. Each time the loan pump is primed, we are told it is “targeted” and “limited”. We shall see.

Despite the central bank’s policy rate antics, monetary conditions became tighter from December 20 and much economic activity in Turkey has come to a near halt. Europe (read as “Turkey’s exports”) has also endured a slowdown so far in 2022. Tightening pressure in the face of booming inflation is now also haunting Europe, with countries experiencing price growth they have not seen for decades.

Still, Turkey’s state statisticians can stay cheerful because they know that slowing economic activity never affects the official GDP growth figures taking shape on their hard drives. On February 28, something between 12% y/y and 15% y/y will be released for 2021. How we will marvel.

For 2022, the most pessimistic growth forecast among officials so far is for 5%, as per usual. The “public bidding” will commence and gather steam right up to the release date for GDP growth in 2022 in March 2023. Another stonking data set will be produced by the world-beating TUIK. Provided Erdogan remains sat on the throne.

Since February 9, banking watchdog BDDK has been releasing data on the FX-guaranteed lira deposit scheme. By February 14, $14bn had been transferred to the central bank's own-account via the scheme. This helped bring a recovery in the net reserves.

For those looking for a new quandary, the money coming in from exporters is ‘lost’. No data is available, but the money is coming in yet the reserves data moves as if no money is coming in. It is thought that the exporters’ money has been burnt through to keep the USD/TRY fixed in its “dirty float”.

The decreed seizure of 25% of export revenues supports the usable reserves while FX shortages work as another tightening cycle.

In addition to the lira fixing activities, the central bank sold a record $4bn to state-owned enterprises in January.

So, “energy-importing,” which essentially meant natural gas importer Botas, has been dropped. This is seen as supporting rumours that suggests a new backdoor was set via state-owned prices to intervene in the USD/TRY market as an alternative to the backdoor via public banks.

On January 24, about $3bn will enter the Treasury’s account at the central bank from the latest sukuk sale. However, about $2bn will have already been redeemed on February 21.

Five-year credit default swaps (CDS) on Turkey have been hovering in the 500s.

In January, the trade deficit boomed. It will remain high in February and March. The regime has again been circulating prospective “tourism revenues” as the big cure for Turkey’s ills. The claims are often blithely repeated by media. Each year, the same stories circulate at the same time. The problem is that the regime is found believing in its own flawed stories.

By 2018, the regime had won through with all its big gambles. Since that year, it has lost them all.

On the global front, tension is growing but the markets seem to have evaded a turbulent end of the new-year rally. May this year could be brutal.

Europe has also embarked on talking about ending its more than a decade long ultra-easy monetary policy. The market uses the talk to avoid a sharp appreciation in the USD. May will be watched.

On March 16, the Fed’s open market committee will announce the results of its next meeting along with updated projections from the governors.

A 50bp rate hike is already priced in. Bets are open on how many rate hikes will be delivered in total.

So, with the committee talking about a sharp and urgent balance sheet reduction, the March meeting will be smoothly left behind.

It is unknown how inflation trends will be absorbed without a recession in the real economy and a collapse in the financial markets.

A war would solve all problems. People can fight for their country rather than protest against booming prices. The markets can take a punt on volatility opportunities produced by the theatre of tension.

In Turkey, the currency is fixed. The stock exchange is fixed. The CDS is fixed. Ukraine, just over the Black Sea, may or may not be on the brink of war with Russia, but in Turkey, thanks to the fixed markets, volatility is not present.

For some local theatre, gangsters in Turkey have  lately been shooting each other. Halil Falyali, the Northern Cyprus-based master of money trafficking, was assassinated in a neat operation that, so it’s said, could only have been executed by a sovereign state.

The assassination team has disappeared without trace.

Anyone expecting Erdogan to vanish quietly should probably think again. But even if the opposition manages to take over the government, it is certain that nothing much will change. Turkey will return back to its 2002 settings. A decade will go by (with a new version of “Erdogan’s economic miracle”).

Central Asia, in areas around China, might be the next place for the creation of some miracles by Turkey.

The decade will be decidedly shaky, just as every decade in the post-World War II era has been. Eventually, there is an inflow of dollars and the Turks object that the country is developing too far, too quickly. Then, the dollars go and Turkey returns to where it began. And it repeats.

As Turkey economically and politically gets ever more desperate, it is expected that the regime will come up with more surprises (bloody?). Jailing a journalist whom you contend suggested you live in a barn (Sedef Kabas live on TV in January: "There is a very famous proverb that says that a crowned head becomes wiser. But we see it is not true. A bull does not become king just by entering the palace, but the palace becomes a barn.") is not going to cut it when it comes to reversing the course of events.