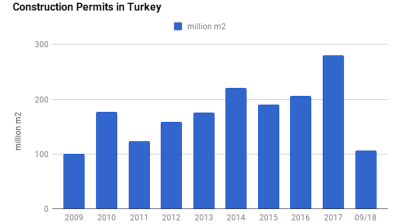 The number of building construction permits granted in Turkey declined by 41% y/y to 77,004 in January-September from 131,408 a year ago, statistics institute TUIK said on November 20.

The figures demonstrate how the downturn in the country, for which the construction sector was previously the main driver of economic growth, has gathered pace.

The floor area linked to construction permits awarded by municipalities decreased by 55% y/y to 106mn square metres in the first nine months of the year while the total estimated value of the buildings decreased by 45% y/y to TRY140bn.

The number of dwelling units authorised under construction permits declined by 59% y/y to 485,356 in the first nine months.

TUIK said on October 23 that annual growth in the construction cost index reached 33.36% in August from 27.01% in July. The index rose 16.18% in December and across the first eight months of 2018 increased at an escalating pace. It can be anticipated that construction costs will recover from the peak seen in August thanks to the Turkish lira’s rebound from its record lows.

Earlier this month, the Treasury devised a rescue plan that would allow construction and real estate companies to offload unsold stock to a state-backed fund.

There are a total of 1.5mn-2mn unsold homes in Turkey, according to sector representatives.

On November 16, state-owned Ziraat Bankasi said in a bourse filing that it had mandated UniCredit Bank AG to issue up to $1.5bn worth of mortgage-backed bonds abroad. It also said that it would issue up to $1bn (TRY5.43bn) worth of identical papers domestically without a public offering.

Total loan volume stood as high as TRY2.59tn at end-August, including TRY420bn of consumer loans.

Exposure to the construction and energy sectors and high borrower concentrations were also significant sources of risk for many Turkish banks, Fitch Ratings said on October 1 when it downgraded the Long-Term Foreign-Currency Issuer Default Ratings (LTFC IDRs) of 20 Turkish banks and their subsidiaries.

Annual home price growth in Turkey edged up from 9.86% in August to 10.48% in September, however the gap between the price growth and inflation reached 14.04pp from 8.04pp in August, central bank data showed on November 16.

Turkey’s annual consumer price inflation rate moved up to 25.24% in October from 24.52% in September, the TUIK announced on November 5.

Consumer sentiment souring
The consumer sentiment index fell by another 3% m/m to 57.3 in October, marking the lowest level seen since December 2008, data released by TUIK showed on October 23.

The seasonally-adjusted construction confidence index recovered by 2.3% m/m to 58.7 in October after hitting a record low level of 57.3 in September.

The all-time high for construction permits in Turkey was set in 2017 thanks to the government’s stimulation efforts to boost GDP growth. The floor area of permits was up 36% y/y to 280mn sqm last year.

Czech industrial production down by 25% y/y in May, up 13.8% m/m
4 days ago
Foreigners’ share at Borsa Istanbul falls below 50%
4 days ago
Albania’s annual CPI inflation slows to 1.8% in June
4 days ago
COVID-19 lockdown sends Hungary's industrial output back to 2013 levels
5 days ago
Russia’s Watcom Shopping Index regains three quarters of ground lost to coronacrisis
5 days ago