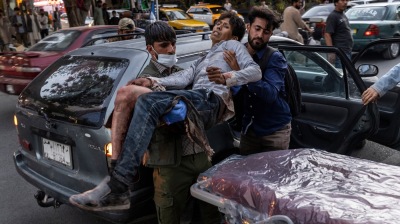 The attack took the lives of 60 and injured over a hundred more. / wiki
By bne IntelIiNews August 27, 2021

There were horrific scenes after Islamic State of Iraq and the Levant – Khorasan Province (ISIS-K) suicide bombers detonated devices in crowds thronging an entrance to Kabul’s international airport, killing at least 60 people and injuring over a hundred more on August 26. At least 13 US soldiers were among the dead.

The crowds have thinned a bit as Afghan civilians try to board planes evacuating local workers, diplomats and now the soldiers that have been protecting the airport as the August 31 evacuation deadline looms. Few get in unless they have a valid exit visa or are a foreign national, but dramatic footage shows families scaling the airport walls and handing over small children in their desperation to escape.

The IS suicide bombers reportedly walked into the midst of this throng and blew themselves up, killing all those around them. Reuters reporters that blood-soaked bodies lay strewn around the ground near the gates to the airport after at least two explosions. Onlookers that survived the blasts then rushed in to help the injured.

In statements to the press, US General Frank McKenzie, head of US Central Command, said the attack was the single deadliest incident for American forces in Afghanistan in a decade and one of the deadliest of the entire 20-year war. The US deaths were the first in 18-months. Some 1,800 US troops have been killed while on tour in Afghanistan, with another circa 20,000 wounded.

Afghan health officials were quoted as saying 60 civilians died, but it was not clear whether that was a complete count, Reuters reports.

A Taliban spokesman said that the attacks were carried out by individuals that were unable to penetrate the security cordon surrounding the airport and were designed to discredit the Taliban that has rapidly taken control of the entire country following the start of the US withdrawal on July 2.

Islamic State is a terrorist organisation that has established a presence in Afghanistan and is an enemy of both of the West and the Taliban. Also known as Daesh, the group claimed responsibility for the attack shortly after the explosions. In a statement the group said one of its suicide bombers had targeted "translators and collaborators with the American army,” according to a Reuters report. US officials also blamed IS for the attack.

"For a moment I thought my eardrums were blasted and I lost my sense of hearing. I saw bodies and body parts flying in the air like a tornado blowing plastic bags. I saw bodies, body parts [of] elders and injured men, women and children scattered in the blast site," said one Afghan who had been trying to reach the airport, as cited by Reuters. "Bodies and injured were lying on the road and the sewage canal. That little water flowing in the sewage canal had turned into blood."

The attack is a blow for the Taliban that has been trying to reassure the Nato powers that it would not allow the country to become a base of terrorism once again. They have also promised the Nato personnel, diplomats and foreign nationals free passage to leave the country, but rejected a US request to extend the evacuation deadline beyond August 31. The Taliban have also said that Afghans that want to leave may and have not prevented any locals with appropriate documentation from entering the airport and boarding one of the evacuation planes.

The Taliban are also hoping to win the locals over with their promise of stability and order; however, there is a lot of scepticism amongst Afghans, who remember the Taliban’s brutal rule 20 years earlier.

In the past 12 days, Western countries have evacuated nearly 100,000 people, mostly Afghans who helped them. But they acknowledge that many thousands will be left behind following Biden's order to pull out all troops by August 31.

The last few days of the airlift will mostly be used to withdraw the remaining troops and the US forces have already ordered all Western journalists at the airport to leave. Transports have also started to carry the withdrawing troops as the US and Nato allies' operation to secure the airport is being wound down. Canada and some European countries have already announced the end of their airlifts.