Iran unrest spreads to sugar factory, gas workers might be striking too 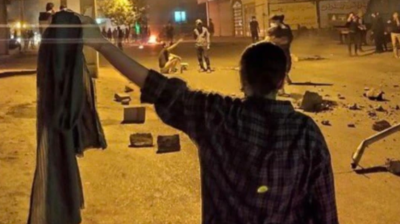 A young Iranian girl removes her hijab during a protest in the city of Sanandaj. / social media.
By bne IntelIiNews October 20, 2022

Employees at Iran’s Haft Tapeh sugar factory in the southwestern city of Shush have started a strike amid the anti-regime protests that have shaken the country for the past five weeks.

Well-known Iranian labour activist Esmail Bakhshi wrote on Twitter on October 18 that managers at the factory attempted to persuade workers at Haft Tapeh not to strike by wiring money into their bank accounts, "but they came anyway to show honor". Some reports indicate that, while persistent, the protests have become scattered. If they came to pass, widespread labour strikes hitting key industries would give the protesters fresh momentum.

Economic hardship faced by Iranians is an essential factor that has helped to fire the protests since they first broke out in mid-September following the death of Mahsa Amini—the 22-year-old who fell into a coma and died while in the custody of the Tehran “morality police” for allegedly wearing a hijab loosely in breach of the Islamic dress code.

Authorities have increasingly met demonstrators with lethal force across the country. The confirmed death toll by now far exceeds 200, with the United Nations saying at least 23 children are among the dead. Among those killed were 16-year-old girls Nika Shakarami and Sarina Esmailzadeh, now two of the most prominent faces of the protests, and Asra Panahi, a 16-year-old schoolgirl said to have been beaten by security forces in the northwestern city of Ardabil for refusing to sing a pro-regime anthem when her school was raided.

Other labour action in solidarity with the protests—often led by women and members of Generation Z, or “zoomers” in their early to mid 20s or teenage years, with the rallying cry “Woman, life, freedom!” —has been reported in several locations in recent days. That’s  especially the case in southern areas where Iran's oil industry is located.

Videos posted by the Organizing Council of Oil Contract Workers in Iran, referred to by RFE/RL, show fuel tanker drivers at Abadan oil refinery refusing to load supplies and blocking the refinery entrance.

Unconfirmed accounts on social media indicated workers at the central workshop of the South Pars Gas Complex, and the Bushehr, Abadan and Bandar Abbas petrochemical companies were also out on strike. Workers at Asalouyeh petrochemical plant and Kangan Petro Refining Company were thought to have launched strikes on October 18.

Students at various Iranian universities are continuing with protests such as sit-ins and shouting down the speeches of government officials. Students at Tehran University on October 18 had a group lunch in breach of the rules on compulsory gender segregation in the cafeteria. In response, security forces moved in and beat some of the students while threatening to arrest them, Radio Farda reported.

Sky News on October 18 reported how the regime has used its upgraded internet “kill-switch” for the first time as Iran’s tech-savvy youth has continued to evade digital censorship.

#MahsaAmini has become the most popular hashtag in the world, though Tehran accuses influence operations run by foes such as the US, Saudi Arabia and Israel of bombarding the internet with propaganda and fake news in an effort at spreading the unrest.