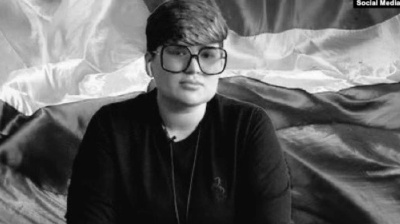 Iran has sentenced two LGBT activists to death, according to a rights group.

Zahra Seddiqi Hamedani, 31, and Elham Choubdar, 24, were found guilty of "spreading corruption on Earth" by a court in Urmia, West Azerbaijan province, the Hengaw Organization for Human Rights said on September 4. Prosecutors, it added, accused Hamedani and Choubdar of promoting homosexuality, promoting Christianity and communicating with media opposed to the Islamic Republic. Official state news agency IRNA confirmed the convictions and sentencing on September 5.

Under Iranian law, same-sex sexual conduct is a criminal offence. Punishments range from flogging to the death penalty.

Amnesty International said that Hamedani, from the predominantly Kurdish town of Naqadeh and also known as Sareh, was arrested last October by the Islamic Revolutionary Guard Corps (IRGC) while attempting to cross into Turkey to seek asylum.

Before she attempted to leave Iran, Hamedani recorded a video, in which she said: "I want you to know how much pressure we LGBT people endure. We risk our lives for our emotions, but we will find our true selves... I hope the day will come when we can all live in freedom in our country."

"I am journeying toward freedom now... If I don't make it, I will have given my life for this cause," she added.

Many Iranians posted demands on social media that the death sentences be revoked.

Hengaw said Choubdar was from Urmia, but provided no other details.

Amnesty published previously published additional information on Hamedani, saying she was a "gender non-conforming human rights defender" who was detained "solely in connection with her real or perceived sexual orientation and gender identity as well as her social media posts and statements in defence of [LGBT] rights".

It cited her as describing how she was forcibly disappeared for 53 days. During that time, an IRGC agent allegedly subjected her to "intense interrogations accompanied by verbal abuse" and "threatened to execute or otherwise harm her and take away the custody of her two young children".

Hamedani's appeared in a May 2021 BBC documentary about abuses suffered by LGBT people in Iraq's semi-autonomous Kurdistan Region, where she had been living, Amnesty added.

The accusation of promoting Christianity, it added, was for wearing a cross necklace and attending a house church in Iran several years ago.

In Iran, citizens not recognised as Christians, Zoroastrians or Jews may not engage in religious expression in public.

Commenting on the corruption on Earth charge, British LGBT rights activist Peter Tatchell told the Jerusalem Post on September 4 that "this very grave catch-all charge is often used against critics of the regime and those who express opinions that are not compliant with Islamic orthodoxy."

RFE/RL reported that a 2020 poll published by the Iranian Lesbian and Transgender Network 6rang found that 62% of LGBT respondents said they had experienced one or more forms of violence by their immediate family. As many as 77% said they had been subjected to physical violence of some sort due to their sexual orientation.