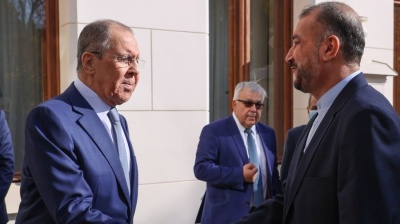 Iran’s foreign minister on February 24 said the Russian invasion crisis in Ukraine was “rooted in Nato’s provocations”, while the regimes of Central Asia only very tentatively addressed the question of the unfolding conflict.

Tehran, which saw itself as subjected to an “economic war” by the US during the Donald Trump administration and partly responded by building ties with Russia, including military cooperation in Syria, stopped short of denouncing Vladimir Putin’s military operation. Iranian Foreign Minister Hossein Amir-Abdollahian, blamed Nato’s actions for producing the Ukraine crisis, but also tweeted that Iran does not see the war as a solution and was calling for an immediate ceasefire and a “political and democratic solution”.

Iranian foreign ministry spokesman Saeed Khatibzadeh also hit out at the Western defence alliance, saying that “the Eurasia region is on the verge of entering a pervasive crisis” because of Nato moves led by the US.

“Generally speaking, Iran never condemns Russia’s foreign aggressions, but at the same time, never recognises the territories Moscow brings under control either,” Hamidreza Azizi, visiting fellow at the German Institute for International and Security Affairs, told Al Jazeera. “This is what we witnessed in the 2008 Georgian war, Russia’s annexation of Crimea in 2014, and now with regard to eastern Ukraine.”

Azizi also observed that Iran’s leaders support Russia’s anti-Western discourse and perceive it as an indication of the West’s decline.

In Central Asia, three of the five ‘stans’—Kazakhstan, Kyrgyzstan and Tajikistan—are members of the Moscow-led CSTO military bloc, while remote Turkmenistan rarely comments on external affairs.

Kazakhstan in particular must tread carefully as regards relations with Russia right now, given how it relied on Russian and other CSTO member state troops to help quell the civil unrest that spread across the country in early January, but on February 22, Kazakh Foreign Minister Mukhtar Tleuberdi did allow himself to remark to journalists that “the issue of recognition for the [separatist] Donetsk and Lugansk people’s republics [in Ukraine] by Kazakhstan is not on the agenda”.

“We operate on the basis of international law and the founding principles of the UN charter,” he said.

Kyrgyz President Sadyr Japarov, however, came close to unequivocally supporting Russia’s recognition of the breakaway so-called republics, saying on February 23: “Perhaps it was a necessary measure to protect the peaceful population of the territories of Donbass, where a large number of Russian citizens live. I would like to point out that it is the sovereign right of any country to recognise a state.”

Tajikistan, meanwhile, home to Russia’s largest military base outside Russia—the base is essential to Dushanbe’s defences when it comes to potential difficulties with the Taliban across the border in Afghanistan—stayed entirely tight-lipped about the Ukraine war.

Little was heard from non-CSTO country Uzbekistan, where there is some nervousness about what a more assertive Russia could mean for Uzbek independence moving ahead.

Political analyst Kamoliddin Rabbimov told Eurasianet that there was a split in views in the country that appeared to reflect feelings about Uzbekistan’s own statehood.

“The supporters of Ukraine are supporters of Uzbekistan's independence. The supporters of Russia are those who back more integration with Russia,” he said, adding: “But year after year, we see critical attitudes toward the Kremlin increasing, not only among Uzbeks, but also among ethnic Russians.”