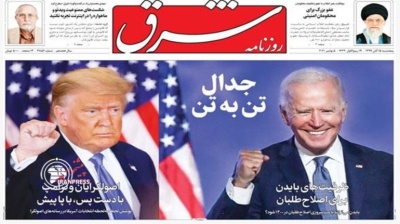 Officials have been warning in Iran's press that the country must not stake too much on a Biden victory and that only self-reliance and self-development offer sure paths.
By bne IntelIiNews November 9, 2020

Donald Trump has put the Iranian economy through a long, cold and bitter winter so the temptation to rejoice that spring is in the air given his loss of the US presidency to challenger Joe Biden is immense in Iran.

But as you might expect from a country that has been seriously wounded by its decision in late 2015 to trust Washington to hold to the nuclear deal struck by Tehran and six major powers, the Iranians are treading a good deal more cautiously than that.

Iranian President Hassan Rouhani, the centrist, pragmatic politician who infuriated hardliners by showing that trust in the US while Barack Obama was in the White House, only for his successor Trump to throw it in his face, said on November 8 that the next US administration should use the opportunity to compensate for Trump’s mistakes, Iranian state TV reported.

“Trump’s damaging policy has been opposed ... by the American people. The next US administration should use the opportunity to make up for past mistakes,” Rouhani was quoted as saying. “Iran favours constructive interaction with the world.”

Biden has said that under his presidency the US will rejoin the nuclear accord, a deal that was agreed by Washington when he was vice president, if Tehran also returns to compliance.

Alluding to Iran’s resistence to Trump since he unilaterally pulled the US out of the nuclear agreement in May 2018 and adopted a strategy of crushing sanctions and other “maximum pressure” measures with support from Israel and Saudi Arabia to try to bring Iran to heel and force Tehran to renegotiate its standing and policies in the Middle East, Rouhani added: “The heroic resistance of the Iranian people proved that the policy of maximum pressure is doomed to failure.”

“The American people have spoken. And the world is watching whether the new leaders will abandon disastrous lawless bullying of outgoing régime—and accept multilateralism, cooperation & respect for law. Deeds matter most,” Iranian Foreign Minister Mohammad Javad Zarif tweeted after Biden’s victory was called.

Reuters on November 7 quoted Robert Einhorn, an arms control expert at the Brookings Institute, on prospects for the US-Iran relationship with Biden in the Oval Office. "It won't be so quick and easy for both sides to get back into compliance. It will take, probably, six months or so and it's possible that they won't be able to reach agreement," he said.

"If Iran chooses confrontation, I am prepared to defend our vital interests and our troops. But, I am ready to walk the path of diplomacy if Iran takes steps to show it is ready too," Biden wrote on CNN's website in September.

Iran has demanded compensation for the "damages" it has suffered under the Trup US sanctions. It has implicitly argued that Washington should repay it for lost oil revenues, but that is something any US leader would find difficult if not impossible to accede to.

"New chapter in the US," said a headline in pro-reform Aftab-e Yazd over a picture of Biden and his running mate Kamala Harris. Another reformist outlet, Sharq, ran with: "Populism was rejected."

Iran’s Supreme Leader Ayatollah Ali Khamenei, however, said the US election was "a spectacle", adding: "This is an example of the ugly face of liberal democracy in the US. Regardless of the outcome, one thing is absolutely clear, the definite political, civil, & moral decline of the US regime."

Axios, meanwhile, on November 8 reported that the Trump administration, in coordination with Israel and several Gulf states, plans a “flood” of sanctions on Iran by January 20, the day Biden is due to take over from Trump.