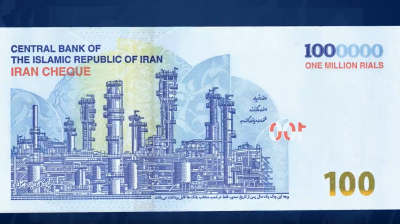 A million rial presently gets you around four dollars and 10 cents on the unofficial FX market.
By bne IntelIiNews February 2, 2021

The Central Bank of Iran (CBI) on February 2 introduced an Iranian rial (IRR) 1mn “cheque note” (worth $4.10 at the free market rate), claiming it is more secure against forgery given additional security features.

The million rial note was once prized, but it has lost much of its potency in recent years because of the collapse of the Iranian currency in the face of heavy US sanctions imposed on Tehran. Referred to as the “Iran Cheque”, the note is not officially classed as regular currency. It has the status of a “cheque”, but it is typically used as regular cash by Iranians.

The new Iran Cheque uses the figure “100” as part of the CBI’s push to gradually displace the rial in favour of the “toman” (presently an informal currency which enables Iranians to knock proliferating zeros off transactions).

When given the green light, the central bank will re-denominate the rial, removing four zeros from it in official usage.

Notes for small sums are gradually being pulled out of circulation by the CBI, while the government and central bank continue to urge people to pay for shopping using the cashless options provided by the internal payment card system of Iran.