Artem Sytnyk was recently appointed as the head of Ukraine’s newly formed anti-corruption body, which the Western-leaning government in Kyiv is creating under pressure from international donors and backers. Sytnyk promises to make fighting corruption in the judiciary a priority, but expresses doubts over the recent number of high-profile public arrests, arguing that without an overhaul of the judicial system they’re unlikely to see justice in the courts.

“Actually, there are not so many reasons to be especially joyful,” Sytnyk tells bne IntelliNews, hinting at the difficulty of the challenge that he will face. “I spent many years working in law enforcement, and I know what hard work means.”

Indeed, it was this experience that persuaded President Petro Poroshenko on April 16 to appoint the 35-year-old former chief investigator of the prosecutor’s office in the Kyiv region as the Anti-Corruption Bureau's first head, after the contest commission had considered over 170 candidates and submitted two contenders for final approval.

Sytnyk believes that one of the biggest problems in today’s Ukraine is “the complete lack” of a fully-fledged judiciary. “The judiciary does not perform the functions that need to be performed. This is one of the most corrupt branches of power in Ukraine,” Sytnyk says.

As such, he vows that fighting corruption in the courts will be the top priority of the bureau, arguing that the rotten judiciary renders meaningless any efforts that the country’s other anti-corruption agencies make. “Any result of our work sooner or later ends up in a court,” Sytnyk says.

According to President Poroshenko, improvement in Transparency International’s Corruption Perceptions Index (CPI) will be the principal measure of the bureau’s efficiency. Ukraine gained only one point in 2014 in comparison with the previous year, and was ranked 142nd out of 175 countries. “Despite ‘the façade of change’, Ukraine continues treading water,” Transparency International concluded. 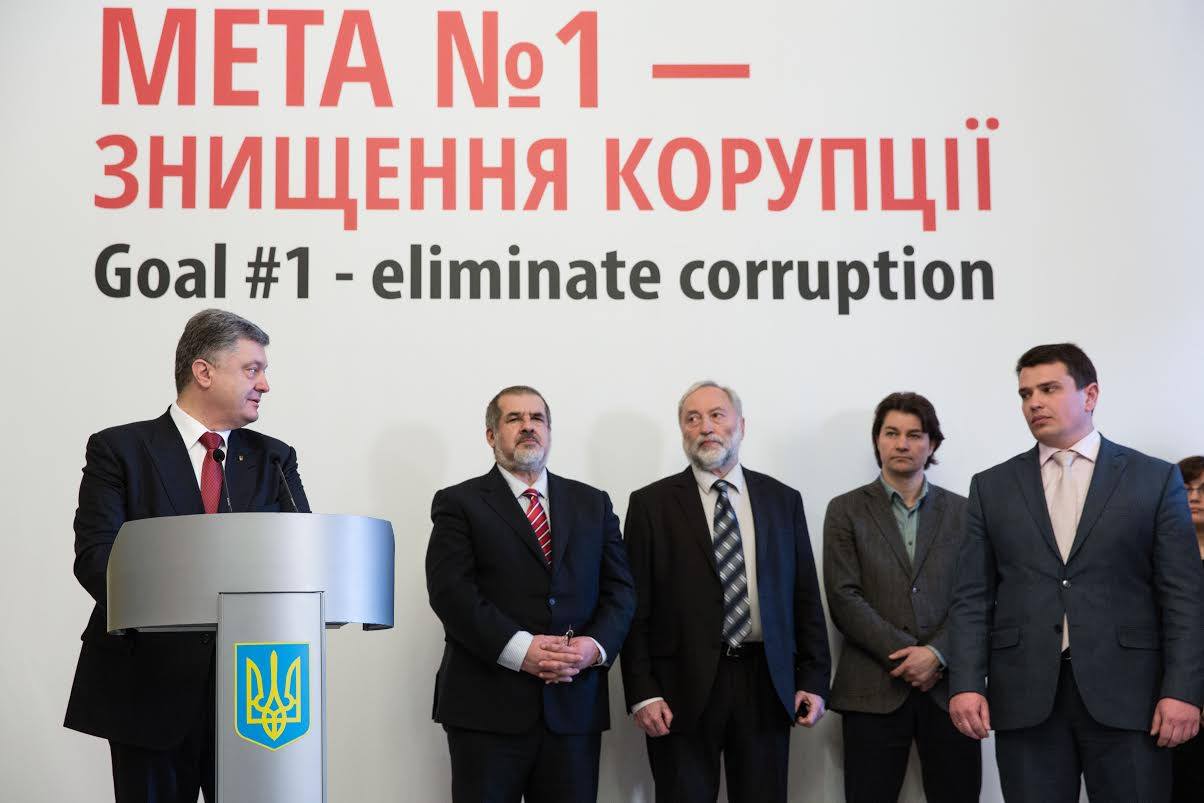 Ukraine’s current government was pressurized into setting up the Anti-Corruption Bureau by the country’s Western backers, who had tired of sending money to help the struggling country and saw it being syphoned off by insiders. In particular, the International Monetary Fund (IMF) made financial support conditional on the implementation of anti-corruption measures from the very outset, including “the establishment of an independent anti-corruption agency with broad investigative powers”, as they put it in a $17bn two-year support package agreed in April 2014.

Despite this pressure, passing the legislation for the creation of the bureau and appointing its head took a year. Moreover, many more months are expected to pass before the institution is fully up and running.

In particular, the bureau’s core department of detectives who will investigate corruption-related cases is supposed to be ready to start work at the end of August. However, this will depend on whether the government has managed to set up an anti-corruption prosecutor’s department within the Office of the Prosecutor General, Sytnyk explains.

Sytnyk stresses that the agency on its own “will not be able to turn Ukraine around”. Instead, its main task will be to provide impetus to the work of other bodies that are on the front line in the fight against corruption, in particular the police and the country's prosecution offices. “We must show that it’s possible to do everything in a new way,” Sytnyk says.

The bureau will have up to 700 employees, who will comprise not only individuals with professional experience, but also young recruits, especially detectives who will be trained by the US Federal Bureau of Investigation (FBI) and other foreign experts. “We will use the experience that other countries have gained in the fight against corruption,” Sytnyk adds.

The head of the bureau has a monthly salary of UAH60,900 ($2,600), which is an almost unimaginable sum for the majority of Ukrainians. Detectives and other employees of the institution will have less lofty salaries, but they will be also significantly higher than the national average. This measure is intended to reduce the possible risks of corruption among the bureau’s staff.

But how effective will this approach be, given the unimaginably large bribes that are periodically reported in Ukraine’s media? Sytnyk believes that the salaries are high enough to attract “honest, decent specialists”. “An official shouldn’t be rich. If you want to become rich, take out a loan and start a business… But an official should not have to wonder where to obtain cash to feed his family,” Sytnyk says. “I had temptations [of bribes] in my career. But I was brought up in an ascetic spirit, and it was easy for me to resist this pressure.”

In March, two senior Ukrainian officials, including the state emergencies service chief Serhiy Bochkovsky, were arrested during a cabinet meeting in Kyiv. However, this move, which seemed to be part of a PR-strategy of Prime Minister Arseny Yatsenyuk, failed to deliver the desired effect. Shortly after their arrest, the officials were released by a court on bail, and Bochkovsky is currently challenging the allegations against him in court. “Public arrests are effective only if the criminal cases are brought to their logical conclusion [in a court]. Otherwise, such arrests will have the opposite effect,” Sytnyk says.

He also urges Ukrainian society not to blame law-enforcement agencies for the slowness in investigating cases against officials of the regime of former president Viktor Yanukovych, who fled to Russia in February 2014 after being ousted following the Euromaidan street protests. “It is difficult for society to understand that [the investigations] will take a lot of time. The scale of the cases [against former officials] is so huge that they can’t be investigated in two or three months,” Sytnyk says.

However, Transparency International is looking at the issue from a different perspective. According to a report by the anti-graft NGO published in late February, the government in Kyiv is avoiding any significant measures to bring Yanukovych and his officials to justice; instead it argues that it's mainly the EU that has taken the lead in investigating  corrupt practices by Yanukovych’s family and his entourage, as well as the process of freezing and arresting their assets and property abroad.