Controversial Ukrainian businessman Dimtry Firtash's gas trading house RosUkrEnergo has had many dubious partners during its role as middleman in Ukraine’s gas industry for the past decade. At one end of the spectrum these have allegedly included Semion Mogilevich, the Russian mafia don, and at the other Ukrainian politicians Vitali Klitschko and the current president, Petro Poroshenko. The pro-Russian Firtash’s connections can now be revealed to extend to Victor Pinchuk – a man once reputed to be Ukraine’s richest, who has spent the time since the February 2014 revolution busy aligning himself with pro-Western politicians in Ukraine, as well as with Tony Blair and Bill Clinton.

Pinchuk enters the Firtash firmament because according to documents obtained by bne IntelliNews, his pipe and steel wheel company Interpipe Group has engaged in some puzzling deals with UkrGazEnergo – a 50-50 joint venture between Firtash’s RosUkrEnergo and the Ukrainian state gas company Naftogaz, although widely believed to be controlled by the former. RosUkrEnergo itself is 50% owned by Russia’s giant state gas company Gazprom.

The deals specified in the documents are complex, but involve payments for gas through related third parties (click here to see the documents).

Interpipe, like other large Ukrainian companies, has been a major purchaser of gas from Naftogaz over the years. Gas is the main fuel used by industry to generate electricity. But like many companies in Ukraine over the past decade of upheaval in the country, it has failed to keep up payments, which led to Naftogaz bringing a number of court cases against Interpipe in Ukraine to recover monies owed. One of these, in June 2013, sought UAH239.3mn (at the time about €21.8mn) from Interpipe, most of which was for unpaid gas deliveries. But instead of paying Naftogaz direct, to whom it owed the money, bne IntelliNews can reveal that Interpipe made several payments to UkrGazEnergo to pay down the debt. This evidence for this is disclosed in a letter written by the law firm Norton Rose Fulbright on April 2, 2014, and obtained by bne IntelliNews.

In spite of the payments, Naftogaz’s court case against Interpipe continued into last year, with the Ukrainian state gas company still seeking full repayment of the amount sought. Observers question why Naftogaz should still be seeking repayment of the UAH239.3mn if Interpipe had already paid down the debt by $43.5mn.

The arrangement to bypass Naftogaz was made by a group of managers at the notoriously corrupt state gas company. In a separate matter, Ukraine recently decided to prosecute former managers of Naftogaz for alleged corrupt relationships with Firtash’s RosUkrEnergo. The Ukrainian authorities are expected to use this latest evidence as they develop their case.

The agreement between Naftogaz, Interpipe and UkrGazEnergo led to the transfer of this $43.5mn ‘receivable’. Observers have noted that both Interpipe and Naftogaz were in a precarious financial condition at the time that the deal was arranged. Interpipe has not published full financial results online since 2012, when it reported a loss of $71.7mn, casting doubt on its ability to continue as a going concern. The company has been hit by the crisis in Ukraine, Western sanctions that have forced it to stop supplying products to Russia, and recently allegations in an article in Newsweek that it violated US sanctions by supplying pipes to Iran in 2011-2012.

According to Philippe Thomas, a Swiss lawyer representing a Russian bondholder in Interpipe, “a discount is almost certain to have been applied both to Interpipe and to the debt between Naftogaz and UkrGazEnergo, although this may have been illegal, as negotiating discounts with state-owned companies is technically prohibited.” Ukrainian state monopolies control the prices they charge, so any cuts in the prices they charge customers are widely assumed to be obtained by paying kickbacks and are thus illegal.

The Norton Rose Fulbright letter admits that the law firm had been “informed by Interpipe in September last year (2013)… that it was not customary in Ukraine to enter into settlement agreements with state owned companies.”

Neither Firtash nor Naftogaz responded to requests for comment, though Interpipe said in a statement: "All transactions Interpipe has made with UrkGazEnergo were in strict compliance with applicable regulations and legislation."

The controversial oligarch Firtash has been much in the news lately. In April he successfully resisted extradition to the US, where the FBI wanted to prosecute him for alleged bribery over an Indian contract. His $125mn bail was provided by a business partner of the Western-sanctioned Rotenberg brothers, former judo sparring partners of Russian President Vladimir Putin. Meanwhile, President Poroshenko and the new reformist government in Kyiv have taken action against local oligarchs, including Firtash, stripping them of assets in an attempt to curtail their power.

Interpipe’s non-payment to Naftogaz for gas supplies, meanwhile, was the subject of a letter in December 2014 by then congressman Steve Stockman to the US Department of Treasury, who noted that it was “another anticompetitive subsidy, impacting American steelworkers who play by fair trade rules.” Interpipe had just been penalised for anti-dumping by the US Treasury. Stockman went on to urge: “Appropriate action by you and the IMF would go far to encourage reform in Interpipe’s financial priorities.” 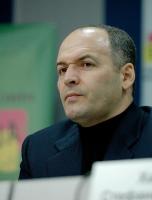