ING: First signs of a technical recession in Hungary 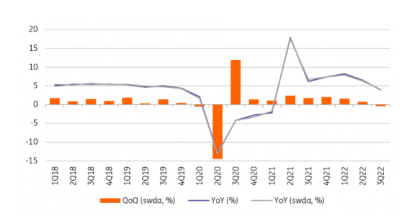 The Hungarian economy continued its slowdown during the third quarter of this year. We expect further weakness in the coming couple of quarters as negative impacts amplify the drag on growth.

Quarterly-based GDP growth in the third quarter of 2022 came in negative, matching the widespread market expectation that economic activity would falter in the second half of the year. The -0.4% quarter-on-quarter growth was weaker than the market consensus but better than ING’s forecast of -1.0%.

As this was a flash release by the Hungarian Central Statistical Office, we haven’t seen any detailed data yet, thus we won't be able to identify the source of the better-than-forecast figure. We will make this assessment when the detailed data is released on 1 December. However, the Statistical Office highlighted in its press release that industry (mostly car manufacturing and electronics) and services were among the most significant contributors to the 4% year-on-year GDP growth in the third quarter, while agriculture was a major drag. 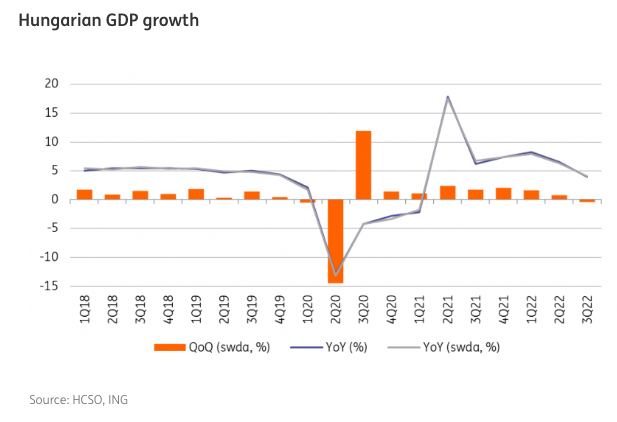 Hungary heads towards a technical recession

The two biggest difficulties Hungary is facing – higher energy bills and increasing unemployment – didn’t fully impact the economy in the third quarter. Nonetheless, the 0.4% q/q drop in real GDP means that we’ve already seen the first leg of the expected technical recession in Hungary. We expect the drop to continue in the fourth quarter mainly due to falling consumption and shrinking investment activity. Real wage growth reached negative territory in September, while new mortgages also dropped. Households have needed to cope with the loss of purchasing power due to rising energy bills since September. In the corporate sector – both in manufacturing and services – we see companies going out of business or reducing working hours due to skyrocketing energy costs. Big data also suggests the economy has been on a downtrend, which will show up in fourth-quarter GDP data. In our view, GDP will fall around 1.0-1.5% on a quarterly basis in the last quarter of 2022.

On the plus side, export activity was widely supported via car and electronics manufacturing and tourism as well. Despite monetary tightening, the slow transmission of higher interest rates translated into solid lending activity, on average, during the third quarter. This was probably a last-minute run from borrowers to secure (relatively) low interest rate funding before rates rise and the banking sector starts tightening non-rate related lending conditions significantly.

Only minor tweaks to our GDP outlook

With the slightly more positive third-quarter data than we expected, we have made a slight upward revision to 2022 GDP growth. We now see this year’s average performance being close to but below 5%. Our updated take on next year’s performance reflects the impact of the base effect and a slightly stronger negative carry-over effect. We expect a positive zero (0.1-0.2%) GDP growth on average in 2023. This forecast assumes that Hungary will be able to close the Rule of Law procedure and meet much-needed milestones to get EU transfers, which will start supporting the real economy during late 2023.