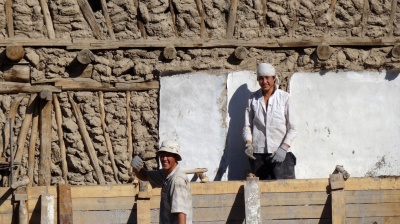 The engines of growth are being heard anew in Tashkent, but the IMF has issued a 'Steady as she goes!' warning.
By bne IntelliNews November 23, 2018

The international financial institution sounded the warning in a November 21 statement following an IMF Staff Visit to the country earlier this month. Uzbekistan has moved back on to the radar of many international investors since reform-minded President Shavkat Mirziyoyev came to power in late 2016 and introduced measures to drive investment and changes that, for instance, make the repatriation of profits viable.

The IMF maintained in its statement that external trade was supporting Uzbek growth, but that import and export data indicated there were early signs of an overheating economy. Much of the import growth, which remained “very strong” throughout the third quarter, was supported by imports of machinery and equipment. Imports were also pushed up by bottlenecks in the domestic production of intermediate inputs, including construction materials.

Current account shifting to deficit
This surge in imports took place as non-commodity exports significantly slowed, reflecting domestic demand pressures, the IMF noted. Uzbekistan’s external position or current account would shift from a surplus in 2017 to a deficit of 3% of GDP this year, and remain in moderate deficit territory over the coming years, according to the Fund’s outlook.

Given that picture, the IMF suggested regulatory measures were necessary to prevent excessive domestic demand and external imbalances. At the same time, however, the IMF noted that a moderate external deficit was beneficial for Uzbekistan and should be expected.

The IMF also said that Central Asia’s most populous nation would continue to see elevated consumer price inflation, primarily due to corrections in distorted relative prices and wages. CPI inflation peaked at 20.5% y/y at the beginning of 2018, but fell to 16.5% y/y by October.

“The GDP deflator—a broader measure of prices of goods and services produced in Uzbekistan—reached 31.5 percent through the first nine months of 2018, primarily reflecting higher prices of export goods following the depreciation of the exchange rate in September 2017,” the statement said.

The IMF attributes expectations of elevated inflation in 2019 to increases in regulated energy prices scheduled for mid-November; additional wage increases for education and health care personnel this year; a 10% hike in public wages awarded in November; higher indirect taxes starting in January 2018; and upward pressures on prices of exportable consumer goods, including fruit and vegetables. As such, CPI inflation could rise to 17-18% by the end of 2019, the IMF anticipated.

Further tightening “may be needed”
“Given rapid domestic demand growth and the unfavorable inflation outlook, the Central Bank of Uzbekistan (CBU) increased the refinancing rate from 14 to 16 percent in September. At the same time, the CBU allowed the exchange rate to weaken in tandem with depreciation trends in major trading partner countries, in line with its policy of not resisting changes in exchange rate fundamentals,” the IMF added. “A further tightening of monetary policy may be needed if inflation starts surprising on the upside.”

In its report, the IMF also stated that Uzbek GDP continued to expand at about 5% in the third quarter, with growth in the communication, construction, mining, and some service sectors remaining strong. “However, growth in sectors that produce goods that can be traded internationally, mainly agriculture and manufacturing, which are especially important for creating jobs, show little sign of pick up,” it added.

“Slow growth in these sectors seems to reflect intermediate input bottlenecks, such as energy and water shortages, as well as land degradation, pests, and bad weather conditions in the case of agriculture. Stronger efforts to attract foreign direct investment (FDI) are needed to stimulate growth in sectors producing internationally traded goods.”

These were the enhancement of the central bank’s ability to control inflation due to a more unified and market-based credit market; a reduction in the high loan concentration in a small number of state-owned enterprises (SOEs), lowering financial stability risks; a reduction in the need for regular capital injections to maintain banks’ capital buffers; a reduction in the misallocation of capital in the economy; and the uncovering of differences in credit terms across different borrowers that remain hidden due to credit market segmentation.

“Directed credit is often extended at highly negative interest rates, which results in a misallocation of credit to low-return investment projects,” the fund said. “It is noteworthy that almost 50 percent of total outstanding credit is owed by SOEs, which—according to available labor statistics—did not contribute to job creation over the last 10 years.”