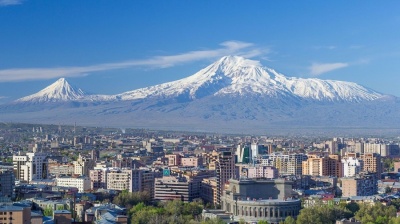 The IMF said the agreement with Armenia is subject to approval by its executive board, which is expected to consider it next month. / bne IntelliNews
By Ani Mejlumyan in Yerevan November 3, 2022

International Monetary Fund staff have reached an agreement with Armenia on a $165.6mn, three-year precautionary standby lending arrangement, the IMF said on November 2.

It said the three-year deal would support the Armenian government's economic programme to preserve macroeconomic, fiscal, and financial stability while moving forward with reforms aimed at promoting inclusive growth.

"Guided by sound macroeconomic policies amid significant global and regional challenges, Armenia is on course to achieve growth of about 11% in 2022, in part driven by large inflows of external income, capital, and labour into the country. Fiscal overperformance and dram appreciation have contributed to a significant decline in public debt, which is expected to drop to 51% of GDP this year from 60.3% of GDP in 2021. While inflation has temporarily increased on the back of supply and demand shocks, the Central Bank of Armenia has proactively raised the policy rate by 625 basis points since December 2020, aiming to steer inflation toward its medium-term target of 4%. International reserves have risen, while the dram has appreciated strongly in the past few months. Important structural reforms have occurred in public financial management, revenue administration, the inflation targeting framework, the financial sector, and governance," reads the statement.

"Economic growth is expected to decelerate in 2023, reflecting weaker external demand and tighter global financial conditions, and to remain in the 4-5% range over the medium term. CPI inflation is  to gradually converge to the CBA's (Central Bank of Armenia) target over the medium term, supported by tight monetary policy and as the impact of external shocks wane," said IMF.

"The current monetary policy stance is appropriate, and further policy changes should remain dependent on the evolution of inflation and inflation expectations. Efforts to foster capital market development and deepen financial inclusion will continue to enhance the effectiveness of the monetary policy transmission mechanism. The staff welcomes the CBA's continued commitment to the existing flexible exchange rate regime, which has served Armenia well in the face of successive external shocks, and to maintaining healthy reserve buffers."

"The current account deficit, which has widened with the rapid growth of the economy, is expected to gradually narrow to around 5% of GDP. The risks to the outlook are mainly external," said the IMF.

Armenia's economy is on the path to growing by at least 11% this year on the back of soaring trade with and remittances from Russia, Finance Minister Tigran Khachatryan said on October 31.

According to the Armenian Central Bank, the remittances from Russia tripled to almost $1bn in the first nine months of this year. They accounted for just over two-thirds of total remittance inflows to Armenia. Consequently, the Armenian national currency, the dram, has strengthened against the US dollar by about 22% since the Ukraine war.

"Within the budget envelope, priority should be given to high-quality expenditure and strengthening the social safety net," reads the IMF statement. It adds: "Staff welcomes the CBA's plans to strengthen risk-based bank supervision and incentivise banks to improve their risk management capacity, as well as to develop an enhanced bank resolution framework."

The fund said the agreement is subject to approval by its executive board, which is expected to consider it next month.