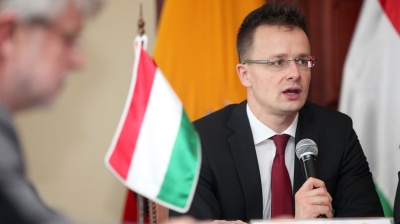 Hungary cannot responsibly support the European Commission's latest package of sanctions against Russia in its current form, Foreign Minister Peter Szijjarto said on May 4, arguing that the sanctions would destroy Hungary's energy security.

As part of the sixth package of sanctions, the European Commission has proposed discontinuing imports of Russian crude supplies within six months and that of refined products within a year. Ursula von der Leyen told EU lawmakers in Strasbourg that the Commission will propose a complete import ban on all Russian oil, seaborne and pipeline, crude and refined.

Hungary's energy supply is currently secure and on a stable foundation, but this sanctions package "would destroy that completely", making it impossible for Hungary to procure the amount of oil necessary to keep the economy running, Szijjarto said earlier. In order for Hungary to support the measures, oil shipments via pipeline would have to be exempted from the embargo, he added.

Ursula von der Leyen did not elaborate whether member states would receive temporary exemption from the sanction, but an EU source told Reuters that Slovakia and Hungary would be able to continue buying Russian crude oil until the end of 2023 under existing contracts. Szijjarto also noted that the EU would allow Hungary to continue buying oil until the end of 2023, because of its heavy dependence on Russian oil.

The latest sanction, like the previous five, would have to be approved by all 27 member states.

Hungary receives 65% of oil and 85% of gas from Russia. The Orban government has argued that there are no alternative transport routes to find replacements for Russian energy sources.

Hungary is a landlocked country that gets 65% of its crude via pipeline from Russia, a thing inherited from the past, he told CNN.  In the past 12 years, Hungary established alternative routes and stepped up renewable energy sources, he added.

The country's biggest refinery, operated MOL, is technically reliant on Russian crude and the switch would take years and millions of dollars according to the company’s chief Zsolt Hernadi.

The pipeline linking MOL’s refinery near Budapest and Bratislava was upgraded and expanded in 2015 and opened jointly by Viktor Orban and former Slovakian PM Robert Fico.

"If Russian oil supplies were to stop tomorrow, MOL could still continue to operate, but with a significantly diminished capacity", Zsolt Huff, head of the downstream unit told business news site Portfolio.hu last month. This would lead to increased downtime and a decline in production in an already product-scarce market, he added.

CEE’s second largest oil company processes 14-15mn tonnes of oil per year, of which roughly 9mn come from Russia, 4mn from  offshore oil from the Adriatic and 1mn from Hungarian and Croatian production.

"Extending sanctions to crude oil would be very bad news for Central European economies", Hernadi told independent news site Telex.hu. The burden of sanctions would be disproportionately borne by Hungary, Slovakia, the Czech Republic and Serbia."

Hernadi argued that the only viable solution would be to give landlocked countries such as Hungary a period of three years of transition, otherwise "we can expect product shortages, economic damage and higher inflation in the short term," he added.

Meloni won the elections, but her programme won’t make Italy the next Hungary
Germany says three out of four Nord Stream pipelines damaged beyond repair
EU prepares eighth sanction package against Russia, including oil price cap but no ban on diamond trading