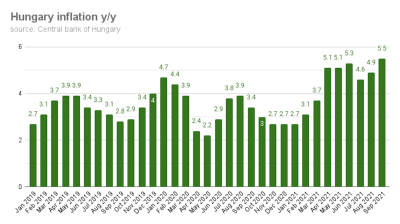 Hungary's inflation accelerated to an annual 5.5% in September, a near nine-year high, from 4.9% the previous month, in line with analysts’ forecasts.

Prices of durable consumer goods increased further. On a monthly basis, the 0.9% rise translated into a 5.1% y/y reading. The last time durables' inflation was above 5% was back in 2009. Food prices grew 4.4% on an annual basis, fuelled by seasonal factors such as the increase in the price of vegetables.

The price of services increased by 3.2% y/y, which again goes against the seasonal pattern, ING Bank said in a note.

In its latest quarterly Inflation Report, the National Bank (MNB) predicted a further rise in inflation in the autumn months and put CPI over 5% for the rest of the year, but the September data exceed its latest forecast, which could further put more pressure on the central bank for a stronger tightening, analysts said.

Hungary’s central bank raised the base by 30bp at three successive meetings between June and August from 0.6% to 1.5%, but slowed the pace of monetary tightening to 15bp at the end of September.

In a separate report, the MNB said the increase in headline inflation was broad-based, as all major groups showed stagnation or acceleration. Fuel added 1.4pp to the figure.

The annual increase in industrial goods prices is higher than the average of previous years, reflecting the gradual pass-through of global commodity price increases into consumer prices, the MNB said.

Rising oil and food prices will continue to push inflation up in the fourth quarter, analysts said. Erste Bank expects inflation to peak at 6% in November.

Upside risks have only intensified in recent weeks due to the energy crisis in Europe and the HUF1.2 trillion (€3.4bn) transfer to be paid out by Fidesz in the coming months, including the tax rebate for families and bonus payments to pensioners.

The data and the outlook underpin the case for a continuation of the cycle of interest rate hikes, and some experts believe that the Monetary Council may need to step up the pace again in October.

Russian economy stable in May, but demand and income contraction deep
19 hours ago
CEE Economic Sentiment Indicators fall on polycrisis woes
23 hours ago
Europe’s gas storage on track to meet 80% full by start of heating season
1 day ago
Kosovo’s population dropped to 1.77mn in 2021 as emigration outweighed natural increase
2 days ago
North Macedonia’s PPI jumps 21.7% y/y in May
2 days ago