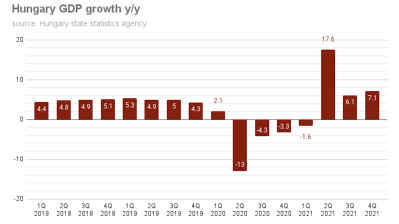 Hungary's GDP grew 7.1% y/y in Q4, bringing full-year growth to 7.1% for the year, above forecast, the Central Statistics Office (KSH) said in a second reading of data on March 2.

The Q4 figure was revised downward from 7.2% in the first reading released on February 15, but full-year growth was unchanged. KSH noted that full-year GDP was up 2.1% compared to 2019, the year before the pandemic.

Hungary’s growth structure was balanced, with industrial output outperforming guidance despite supply chain problems. Construction was fuelled both by public and private spending, propelling the sector to record output, while consumption and services remained strong despite rising inflation from H2.

After the preliminary data, the finance ministry revised 2022 GDP growth projections by 1pp to 5.9%.

On the production side, services added 4.6pp to Q4 headline growth, the construction sector 1.2pp and industry 0.4ppt. Output of industry – likely hit by supply-chain interruptions – rose just 2.1% during the period, while output of services climbed 8.1% and construction output increased 21.4%.

Within services, output of the commercial accommodations and catering segment rose 68.8%, rebounding with the lifting of pandemic restrictions.

For the full year, services added 3.6pp, industry 1.9pp and the construction sector 0.7pp to headline growth on the production side. On the expenditure side, final consumption contributed 3.1pp, gross capital formation 2.4pp and the trade balance 1.7pp.

ING Bank chief analyst Peter Virovacz said Q4 growth was supported by an "extraordinarily strong" performance in the construction sector and industry, but 2022 outlooks are clouded by the war in Ukraine.

ING has knocked down its growth forecast to 5.7% from 6.2%, with strong downside risks.

The base effect played a big role in the 7.1% growth last year, K&H senior analyst David Nemeth said, adding that the 5.5% target is full of downside risks.

Russia’s industrial output decline slows to only 0.1% in August
3 days ago
Poll shows Putin's popularity took hit in September but remained as high as 77%
3 days ago
Russia on track to have a record-smashing grain harvest
5 days ago
Bosnia posts annual CPI inflation of 16.8% y/y in August
5 days ago
IMF sees Romania’s economy growing by 4.8% in 2022, analysts are even more bullish
6 days ago