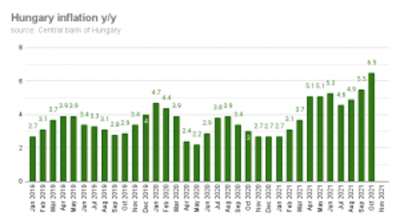 Consumer prices in Hungary rose 6.5% year on year, their fastest rate since October 2012, up from 5.5% in the previous month, according to data released by the Central Statistics Office (KSH) on November 9. The figures are well above the 6% market consensus and the National Bank’s 6.1% projection. Month-on-month inflation was 1.1%.

In a separate reading, the MNB said the rise in inflation in October was "primarily driven by an increase in fuel, industrial goods and food prices".

It noted that fuel prices contributed 1.9pp points to headline inflation. But it was not just about fuel and energy, but prices hikes were broad-based across all segments.

Headline inflation is on track to climb further, hitting 7% in November, according to analysts. Takarekbank raised its 2021 target from 4.9% to 5% and next year’s projections from 4.4% to 4.7%, with continued upside risks from higher global commodity and transport prices to shortages of raw materials.

There are a number of upside risks: the spillover effects of expansionary fiscal policy, continued wage increases and rising energy and commodity prices, as well as supply-side frictions on consumer prices, according to Erste Bank.

Hungary’s MNB became the first central bank in Europe to launch a tightening cycle in June, a sharp U-turn from its ultra-loose policy. It raised rates by 30bp between June and August, but slowed down the rate hike to 15bp in September and October.

The MNB had been to assess the results of its rate-setting cycle in December when the next quarterly inflation report is due out, but analysts widely expect policymakers to take a more aggressive step at the next meeting, as its peers in Poland and Czechia have also bumped up the base rate by 75bp and 125bp respectively.

At the last meeting, policymakers said inflation "would remain elevated over a longer period" and that achieving the inflation target "may be delayed" compared to the projection in the September report.