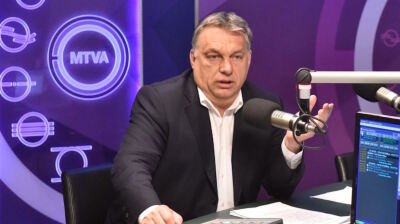 Hungarian Prime Minister Viktor Orban,  under growing pressure from the Pegasus wiretapping scandal and the suspension of recovery fund money from Brussels, has launched a new communication frontline by announcing a referendum on the controversial anti-LGBT law on July 21.

Orban justified the referendum, which was announced just minutes after the government lifted the state of emergency laws in a decree, saying that the European Commission "abused its power" and "attacked Hungary" when it launched an infringement procedure against Hungary over a law banning the depiction of homosexuality.

Holding local referendums will still be banned, according to the decree, which observers say has to do with the government’s attempt to stifle an initiative by Budapest local government on the construction of China's Fudan University.

In a Facebook video, the prime minister said that Brussels demanded changes to Hungary’s education and child protection regulations that would allow LGBT activists to go into kindergartens and schools to provide sexual information.

"Our children’s future is at stake and we cannot make concessions", he added.

The government’s anti-paedophilia law that the government began to refer to as the "child protection bill" has stirred an international uproar.

Last month, the EU Commission president, Ursula von der Leyen, described the bill as "a shame" and discriminatory. "I will use all the legal powers of the EU Commission to ensure that the rights of all EU citizens are guaranteed," she wrote on Twitter.

The European Commission launched an infringement procedure against Hungary on July 15 just a month after the controversial anti-LGBT legislation was passed at the last session of parliament. The regulation prohibits or limits access to content that promotes or portrays the so-called "divergence from self-identity corresponding to sex at birth, sex change or homosexuality for individuals under 18."

Human rights groups widely condemned the regulation, seen as a copy-paste of Russia’s homophobic laws for stigmatising LGBT people and for conflating sexual and gender diversity with paedophilia under the pretext of protecting children.

Most of the questions on the list are already regulated by law, analysts observed. Hungarian law does not now allow sex reassignment surgery for minors. None of the questions address the criticism raised by the European Commission.

1. Do you support that children shall encounter sexual educational content that shows different sexual orientations without parental consent?

2. Do you support that sex changing procedures shall be promoted to children?

3. Do you support that such procedures shall be made available for children?

4 Do you support that media programmes which influence children's development shall be aired without restrictions?

5. Do you support that media progammes which portray sex change shall be available for children?

Hungary’s united opposition said Orban’s initiative is just a distraction from the wiretapping scandal and they called for a boycott.

Government officials have not given an unequivocal anwer whether the government acquired NSO's spy software.

Gergely Gulyas, head of the Prime Minister's Office, on Tuesday evening failed to offer further clarity. "We can say only one thing: covert information gathering has clear rules. These rules have been fixed for decades and must be observed,” he said.

Gulyas did not directly refer to the Israeli software, however, and only added that every information-collection regulation is observed.

Hungarian Interior Minister Sandor Pinter said the Orban administration has not conducted any illegal surveillance in Hungary since taking power in 2010.

Orban has yet to speak on the issue that some observers dubbed as 'Orbangate' the most serious scandal of the last 30 years.

Parliament’s national security committee will convene on Monday, but the meeting will be inconclusive as Fidesz is planning to boycott the meeting.

Chairman of the liberal Momentum party Andras Fekete-Gyor said the government only wants to divert attention from the surveillance scandal, the Fudan University, and the runaway inflation with this hate-mongering, fake referendum.

Observers say the ruling radical rightwing Fidesz is gearing up for the 2022 election campaign by throwing in a subject that it sees will enjoy the support of Hungarians, as it did in 2016 when it organised a referendum against the EU’s mandatory resettlement quota.

In the 2016 referendum less than 43% of the 8mn electorate turned out for the vote, below the 50% turnout required for it to be binding, but more than 98% sided with Orban by voting against the admission of refugees to Hungary, allowing him to claim a "resounding" victory.

The Fidesz fraction issued a statement on Wednesday saying that the left, as in the case of migration, has sided with Brussels on this issue. "Bureaucrats in Brussels and Soros organisations feel hurt that LGBT activists are not allowed near children", they added.