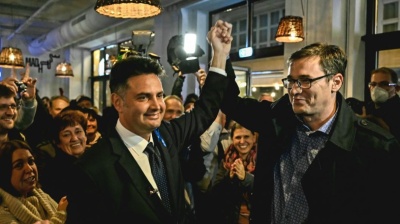 Conservative mayor Peter Marki-Zay emerged as the winner of Hungary’s historic primary election ahead of Klara Dobrev, who was supported by the leading opposition party Democratic Coalition (DK), amid record turnout. Hungarian opposition supporters chose an outsider without any party affiliations to lead the united opposition in the crucial 2022 spring parliamentary elections to face off Viktor Orban.

Hundreds of jubilant supporters packed into a bar in central Budapest to celebrate the landslide upset victory of the 49-year-old mayor of Hodmezovasarhely, running on an anti-corruption and pro-market platform backed by his own Movement for Hungary.

Marki-Zay won by a landslide, gathering 57% of the votes. His support came predominantly from young and middle-aged urban voters, while DK did well in rural areas thanks to its dedicated base of elderly voters.

President of the liberal Momentum party, Anna Orosz, who took over leadership of the party just last week after the resignation of Andras Fekete-Gyor, said the primaries offered a new ray of hope for Hungarians wanting regime change.

Momentum became the first party to officially endorse the conservative mayor after the first round, after a disappointing performance of Fekete-Gyor, who received just 3% of the votes and ranked last among five prime minister candidates.

Budapest mayor Gergely Karacsony also got a standing ovation as he entered the upscale Budapest bistro. He hugged the winning candidate after a week full of bitter debates that threatened to drive a wedge in the unity of the opposition.

"It is a victory for all 10mn Hungarians and there is only one person who is sad and frightened about the future, and his name is Viktor Orban", he told enthusiastic supporters.

Marki-Zay fought a fierce chicken game battle with the Budapest mayor on who should step back after the first round that changed the mood of the campaign and unnerved many supporters.

Karacsony withdrew from the race even as he garnered 27% of the votes in the first round compared with Marki-Zay’s 20%.

The campaign got personal after it became a two-person race. Dobrev accused Marki-Zay of Trump-like tactics, false accusations and misinformation.

At one point during their second televised debate, she called her rival unfit for the post. After a rough start, on economic and social issues, both candidates agreed to restore the rule of law and adopt a new constitution as they accused Orban of dismantling checks and balances and hijacking the country’s democratic process since taking power in 2010.

Dobrev dominated the first round of the primaries. Thanks to her loyal and committed supporters she won 34% of the votes.

In the runoff, she continued to tour the country relentlessly but failed to expand her base even as she ran a more populist platform than her rival, promising massive wage hikes for teachers and nurses and balancing out home subsidies that favour the well off.

Health care and education are seen as two sectors neglected by the Orban government, facing a dire labour shortage and deteriorating service levels. Dobrev also promised to balance social injustice and said Hungary has had enough of 12 years of rightwing rule, calling for a leftist switch.

At a press conference on Sunday night, Dobrev thanked her supporters and called for putting differences aside.

"From now on we have to concentrate only on how we can defeat Viktor Orban and how to dismantle his regime", she said, adding that as a leftist-progressive party, DK will continue to represent the voice of left-wing voters "because that is what we have been mandated to do".

Analysts said Marki-Zay’s rise to the top is a victory for civic Hungary and for those who wanted change within the opposition landscape, a fresh face, who can bring new life to the opposition.

His emergence from obscurity to beat the leader of established parties is also a testament to the success of the primaries.  His popularity shows that opposition voters chose someone who put replacing the entire political elite of the last 30 years at the forefront of his agenda.

Marki-Zay fought a relentless anti-corruption campaign and vowed to step up against opposition politicians caught red-handed, whichhas created tensions during the primary.

"It is the victory of the coalition of the pure and a defeat for those susceptible to blackmail fraud and corruption", he said in his victory speech

He also warned of traitors within the opposition camp.

"We have won the battle, but not the war", he said, bracing his supporters for brutal attacks against him by the ruling Fidesz party.

Marki-Zay’s cooperation with opposition parties as a prime minister candidate won’t be free of conflicts. The main friction between the rainbow coalition lies between newcomers and those holding government offices before the 2010 era, such as the Socialists and the leading opposition party DK founded by Ferenc Gyurcsany, the husband of Klara Dobrev.

DK will likely have the most mandate in parliament among the six parties in the coalition and will have a major say in shaping politics. Their cooperation with the joint prime minister candidate will be decisive for the success of the new government, if elected, analysts noted.

Many on the opposition, from Budapest mayor Gergely Karacsony to Momentum shared Marki-Zay’s view that that Klara Dobrev’s candidacy would be an advantage for Fidesz.

Although he praised Dobrev professional career and her aspirations to become Hungary’s first female prime minister candidate, he stressed that she would have problems drawing in undecided voters as Ferenc Gyurcsany remains one of the most divisive and unpopular figures in Hungarian politics.

Fidesz has used Gyurcsany as a bogeyman, claiming that he is pulling the strings as the head of the leading opposition party.

Fidesz political spin doctors were expecting Karacsony and Dobrev to succeed, hence they built up a negative campaign against them just as the primaries kicked off. The Stop Gyurcsany, Stop Karacsony petition was aimed at mobilising the core base but served to warn voters that with leftist opposition, the country would return to the pre-2010 era.

Hungary only managed to escape bankruptcy via an IMF bailout in 2008 as the crisis hit when the economy was on a weak footing, with a high jobless rate, rising inflation and weak growth.

Few had thought that Marki-Zay with little political experience and lack of resources would topple Dobrev.

As a former supporter of Fidesz and a father of seven, he is now seen as the least favourable option for the ruling nationalist party, as he can possibly attract disenchanted rightwing voters.

"I was a devoted Catholic when Viktor Orban was rallying against the church", he said, referring to the early years of Fidesz, which emerged from a post-communist youth movement to a radical liberal party between 1988 and 1993, before shifting to centre-right.

Marki-Zay burst into Hungarian politics just before the 2018 parliamentary elections, when he comfortably beat Fidesz strongman, former cabinet chief Lazar Janos in a mayoral by-election amid a smear campaign.

In a television interview, he compared beating Lazar to ousting the bully of the class, and he made that comparison to Viktor Orban as well.

Fidesz and the opposition have about 2.5mn supporters and the election outcome will hinge on the 1mn undecided voters, he said, adding that even a two-thirds majority could be in the picture.

Polls show roughly even support for the two blocks. Liberal think-tank Republikon in a fresh forecast said the election will be decided in less than a dozen constituencies. If the opposition can rally supporters in these constituencies, it could win the 2022 elections. There are roughly 30 constituencies leaning one way or the other, and the rest can go both ways.​