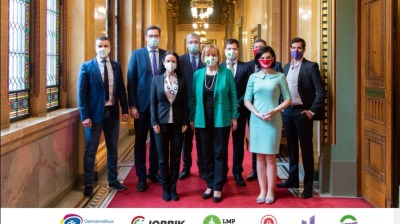 Hungarian opposition party leaders after the signing of the agreement.
By bne IntelliNews January 6, 2021

Hungarian opposition parties signed a six-point document on January 5 in which they pledged to build a "democratic, socially equitable, environment and climate-conscious, cooperative Hungary".

The symbolic agreement comes 15 months before the 2022 general election, and represents the latest step in the cooperation of Hungary’s fragmented opposition.

The agreement lays down the principles of joint governance and the foundation of a detailed government programme. The party leaders have agreed to name their candidate for prime minister in the autumn.

In late December the six parties - the Democratic Coalition (left-liberal), MSZP (centre-left), Parbeszed (left-liberal), Momentum (liberal), Jobbik (centre-right) and LMP (Green) agreed to run on a joint party list and nominate joint candidates in each of the 106 individual seat districts.

Five years ago, this form of cooperation between opposition parties would have been unthinkable, according to political analysts. The fault lines in 2022 will not be about right or left, but about Viktor Orban’s personality and his government, they added.

Although polls still show Fidesz in a massive lead, if opposition votes are added up, the support for the two blocks is level. The ruling party has lost some 500,000 voters in the past months and the economic fallout of the COVID-19 crisis threatens to erode support further for the government, according to a report by Zavecz research.

The election rules were rewritten by Fidesz before the 2014 elections, including the gerrymandering of districts clearly favouring the ruling party.

Hungarians working abroad, who voted in a larage majority against Fidesz, are not allowed to vote in mail, unlike some 600,000 ethnic Hungarians in neighbouring countries who received Hungarian citizenship under the Orban government. This number has exceeded 1mn since. The vast majority of them voted for the radical rightwing government. In 2018 a number of bogus parties set up before the election and backed by Fidesz also divided the opposition landscape.

However, the main catalyst behind opposition parties joining forces was the scrapping of the two-round system into a single round vote. In December parliament approved the ninth amendment of the Basic Law (Constitution) which included changes in the election rules. For parties to establish a national list, a party must run 71 individual candidates in at least 14 counties and the capital, as opposed to 27 previously.

In an earlier interview, Orban referred to the 2022 elections as a freedom fight with enormous stakes, while denouncing the opposition's cooperation "as mixing like a sausage". He accused them of being controlled by Hungarian-American billionaire George Soros.

The media empire controlled by the ruling Fidesz party will try to drive a wedge in the cooperation. The main message so far has been directed against former Prime Minister Ferenc Gyurcsany, head of the Democratic Coalition, with claims that the cooperation is orchestrated by him.

The 59-year-old is still one of the lowest-ranked politicians in popularity but as head of the biggest opposition party, he is a force to be reckoned with.

Gyurcsany, who was prime minister between October 2004 and April 2009, is blamed by Fidesz for mismanaging Hungary’s economy, which led to the country asking for a $25bn bailout.

The then prime minister admitted that his government lied about the economic situation in the run-up to the 2006 campaign, the last time Viktor Orban lost an election. The leaked recordings led to riots on the street of Budapest in September and October, when police used rubber bullets against protestors, causing several injuries.