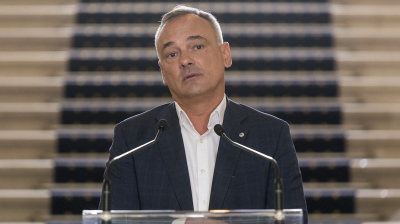 Borkai said he had decided to leave Fidesz to avoid causing the party a moral disadvantage. But he is staying on as mayor.
By Levente Szilagyi in Budapest October 16, 2019

Narrowly re-elected but no longer welcome among the ranks of Hungary’s ruling nationalist-populist Fidesz party (its youth wing, “Fidelitas”, may not be too keen on him either)—Zsolt Borkai, mayor of Gyor, whose local election campaign came off the rails in the face of a sex tape scandal in which video clips showed him with prostitutes aboard a luxury yacht, on October 15 announced that he was quitting Fidesz but would remain in office as an independent.

The previous day, he had been summoned to Budapest to hold talks with party leaders on his future. The discussions took place against a backdrop in which Hungarian opposition parties were celebrating some stunning upsets in the October 13 local elections, although Borkai scraped home in his race by a few hundred votes.

Fidesz was beaten in four of the five biggest cities in Hungary, including in Budapest’s much-coveted mayoral race. The defeats marked the first major setback for Viktor Orban’s party since 2010.

The blog posts also made serious corruption allegations accusing Borkai and his team of diverting HUF1bn (€3mn) annually from the city's coffers. Although the allegations in the blog were not backed up by documents, a detailed description of the corruption schemes seemed familiar to many people.

The revelations caught the ruling Fidesz party off guard, even though party leaders apparently knew about the tapes. For days they remained silent but as the scandal grew bigger they came out with the official line that the sex scandal was a private matter for Borkai. They stuck to it, something which furthered angered voters.

The scandal was, however, not quite enough to stop Borkai from winning another term as mayor of Gyor, an industrial hub that is home to a big Audi auto factory. He won the race by only a few hundred votes in contrast to the two landslide victories he claimed in the previous two races.

In a short press briefing, Borkai said he had decided to leave the party to avoid causing Fidesz a moral disadvantage.

Borkai added that he was staying on as the city’s mayor as an independent candidate to honour the trust Gyor citizens had shown in him at the ballot box. He did not reply to questions.

Parties of the opposition won local polls in several cities and a handful of Budapest districts because of scandal associated with Fidesz, cabinet chief Gergely Gulyas said at a conference. Opposition parties lost in traditional conservative districts in Budapest.

Analysts said the Borkai scandal was only the tipping point for many voters. Liberal and moderate conservatives have grown tired of the illiberal policies of Orban, the backslide in democracy and rampant corruption. The silence of pro-government media in the midst of what amounted to the biggest story in recent years mobilised voters.

Evaluating the ruling party’s result, Gulyas said the scale of victory was similar to the right-wing’s robust showing in the 2006 local elections but less spectacular than its results in the general elections of 2010 and 2014. Fidesz received 1.8mn votes compared to 1.4mn for the opposition. The party secured a majority in all 19 counties.

Gulyas said that Hungary’s political landscape has changed with the emergence of two blocs. The Fidesz leadership assumed that voters of both the right and left would not vote for the joint opposition platform. Opposition parties agreed to unite behind one candidate in most towns and cities, successfully fighting the divide-and-rule tactics of Fidesz.

The victory by opposition parties in key cities means that they can start building again and assemble resources and a national network in preparation for the 2022 general election.