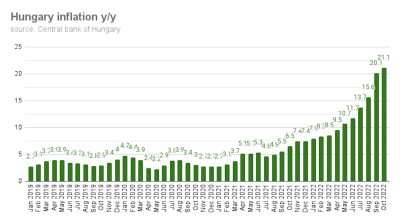 Hungarian headline inflation moved up to 21.1% in October from 20.1% in the previous month, a 26-year-high, according to the statistics office KSH.

Core inflation, which excludes volatile fuel and food prices, rose from 20.7% in September to 22.3% y/y, slightly above estimates.

On a monthly basis, consumer prices rose 2% on the back of surging food and energy prices.

Inflation in the January-October period rose 12.7% y/y. The Hungarian National Bank (MNB) had said the October CPI "could surprise" to the upside.

Food inflation hit a record 40% in October. Among foodstuffs, the price of eggs went up a whopping 88% in the last 12 months. Bread, milk and butter cost 71-75% more than a year ago.

The Hungarian government announced a price cap on eggs and potato on November 9 (link). The measure would reduce the price of eggs by around 25% and the price of potatoes by about 10%, shaving 0.1-0.2pp off headline inflation, cabinet chief Gergely Gulyas said at the weekly press briefing.

Analysts said the weak forint, the windfall taxes on retailers and the negative impact of food price caps were the main drivers of buoyant growth in food prices in Hungary, which have grown among the fastest in the EU. Retailers are spreading losses on price-capped foodstuff by raising the price of other products. The measure has also led to the shortage of flour or sugar in shops, two of the half a dozen foodstuffs under the current price cap.

The data show consumer durable and service prices increased by 14.9% and 8.3% respectively on an annual basis. Prices in the category of goods that includes vehicle fuel rose 11.1%.

In a separate report, the MNB said food prices contributed 1.2pp to the increase in the October headline inflation, while fuel prices reduced the rise by 0.5pp due to base effects.

"We expect annual inflation to remain above 20% in the months ahead, and to start decelerating from Q2 2023, due to easing supply-side price pressures and partly to a significant moderation in demand", Erste Bank said in a note, adding that inflation could return to single-digit territory in Q3 2023.

Rising energy costs and food prices will lift Hungary’s CPI to 14% in 2022 from 5.1% in 2021, Magyar Bankholding said, adding that inflation next year will be close to 2022 levels.

The MNB said earlier it projects the headline figure to return to its 4% tolerance band in 2024.