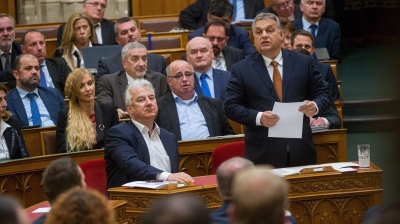 Hungary's government submitted a bill to parliament on March 20 that would extend a state of emergency declared on March 11 to enact measures containing the spread of the coronavirus (COVID-19). Opposition parties voiced concern about granting the cabinet special powers for an indefinite length of time.

Parliament is expected to debate the bill on March 23 and vote on it the next day. A four-fifths majority is needed to pass the legislation, which according to the ruling Fidesz party would confirm measures already in place to protect the economy and people's safety.

Hungary's constitution allows the government to declare a state of emergency for a period of 15 days, but the approval of two-thirds of lawmakers is required for any extension.

The bill would allow the government to "suspend the application of some legislation, diverge from legal provisions and take other extraordinary measures by decree in the interest of ensuring the security of life, health, person, property and rights of citizens as well as the stability of the national economy".

The bill aims to ensure the government's power to take further measures and keep existing ones in place if parliament is unable to convene for reasons related to the coronavirus pandemic. It would give the government the power to cancel any scheduled by-elections and prohibit the scheduling of new by-elections as well as the initiation of any local or national referendums.

The bill would establish stiff penalties for violations of quarantine and isolation, ranging from one to eight years in prison. Individuals who obstruct measures to contain the spread of the coronavirus could also be jailed for up to a year under provisions in the bill. People disseminating false facts could face prison for three years, and up to five years if those impeded the effectiveness of measures to contain the coronavirus.

Touching on that issue Hungary's government spokesman for international affairs blasted foreign media for "grossly distorting" the facts about the bill. Zoltan Kovacs said that some media outlets jumped on the provision of the bill by producing such sensational headlines as "Hungarian journalists could end up spending several years in jail".

Opposition parties are not supporting the bill as it would grant the government special powers for an indefinite length of time.

The largest opposition party DK would approve granting extra powers for the government for a limited time, which would be restricted to measures pertaining to the epidemic response and its impact on the economy only. The government would not be allowed to use the pandemic to exercise extraordinary powers in other areas, the party said.

Green party LMP called for suspending "investments not serving the development of Hungarian economy”, such as the upgrade of the Paks nuclear plant and the HUF600bn (€1.7bn) upgrade of the Budapest-Belgrade railway line.

The number of confirmed cases of the novel coronavirus infection in Hungary had risen to 131 by Sunday, a near two-fold increase from Friday. Medical officials warned that Hungary was in the second phase with mass infections expected. Over the weekend three people died, bringing the total number to six. According to the government website, 16 people have so far recovered from the infection.

There are 115 people being isolated in hospitals and so far 4,443 samples have been taken, which still remains very low compared to other countries.

The average age of those dead is 66 years, while the average age of seven patients in intensive care is 69 years. So far, 3,945 people have been ordered into home quarantine nationwide, with 84 sanctioned for breaching the measure.