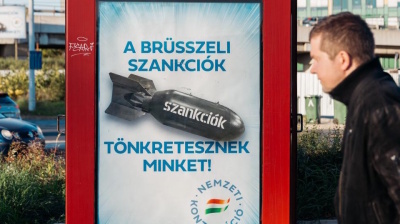 The Orban government launched a new ad campaign, with a bomb with the word sanction on it and the message that "sanctions of Brussels are ruining us". / bne IntelliNews
By Tamas Csonka in Budapest October 31, 2022

Hungary is one of the main targets of Russian disinformation and the country's radical rightwing government has helped to spread the Kremlin's narrative, according to experts.

Last week a European Parliamentary committee revealed the way Russia uses disinformation campaigns and other tactics to expand its sphere of influence within the European Union, and how it specifically targeted Hungary and Spain. On the same day, a report by a Hungarian NGO showed the presence of a massive Kremlin troll network active in Hungary.

Experts at the committee hearing said the purpose of the Russian disinformation campaign, which has become a key tool in the war against Ukraine, is attempting to instigate chaos and destabilise Europe.

Hungary has become one of the most successful examples of this influence as the government has echoed the Russian narrative,  while maintaining the country’s energy dependence on Russia, said Peter Kreko, managing director of Political Capital, an independent policy research and consulting institute.

Hungary is the country most dependent on Russian gas in the EU and the Fidesz-led government in the past 12 years has done little to lessen that dependency, he added.

Budapest has approved all sanctions against Russia but vowed to veto any proposal that would endanger its energy supplies from Moscow. Hungary, which imports Russian oil from pipelines, won an exemption for pipeline crude from the import ban of Russian crude that will come into effect from early December.

Hungary has a 15-year gas contract with Gazprom, but despite claims by Russian President Vladimir Putin that Budapest is getting gas at a fifth of the market price, this has proven to be unfounded as the formula setting the price is linked to the Dutch TTF gas hub with a two to three month lag.

In 2014, Hungary commissioned Russian state-energy giant Rosatom to build two 1,200 MW reactors in Paks, next to the country’s sole nuclear power plant. The government, after winning a fourth straight supermajority win, accelerated the investment in spite of the war in Ukraine and sanctions against Russian companies.

Kreko said that while the vast majority of EU states have expelled Russian diplomats since the Ukraine invasion, the number of people working at the Russian embassy in Hungary has increased in the past year, from 46 to 56.

Hungary has remained committed to its membership in the International Investment Bank (IIB), which moved its HQ from Moscow to Budapest a few years ago even as many of its CEE peers quit the financial institution seen by many as a "spy nest" of the Kremlin.

A report published on Friday by Political Capital unveiled the operation of the covert Russian online troll network active in Hungary.

Using the SentiOne online monitoring platform, experts studied the databases of relevant comments posted on Facebook between February 25 and 31 July 31, which showed that Russian propaganda was set in full motion just after the outbreak of the war.

Pro-Russian trolls have consistently spread the same three or four narratives to justify the war, most intensively just after the war broke out.

These include claims that "Ukraine has committed genocide" against minorities in the country. Russian trolls in Hungary have sent hundreds of messages on social media claiming, "Nato wanted to set up a military base near the Black Sea", or that "Ukraine as a state does not exist".

As Orban has demonised Western allies for criticising Hungary’s democratic slide and for abandoning their traditional Christian roots, Fidesz’ moderately pro-EU camp became a fan of Putin. Among Europeans, the proportion of Hungarian people blaming Ukraine for the war is the highest.

These views are amplified by heavily biased pro-government media and the government’s opportunist policies.

The government has recently launched an ad campaign against EU sanctions on Russia with billboards depicting a bomb with the word "sanctions" on it. The caption reads "Sanctions of Brussels are ruining us".

The EU has denounced the campaign, which is widely seen by analysts as another communication tool by the government to shift blame to the European level for high energy prices and inflation.