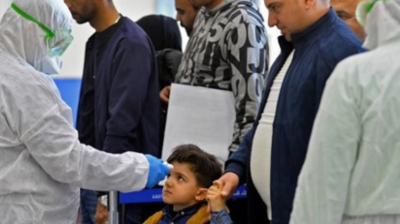 The virus situation in Tehran is presently so bad that the lockdown in the capital has been extended to a second week.
By bne IntelIiNews October 10, 2020

Hospitals in Iran have been ordered to no longer admit non-emergency patients because of the number of hospital admissions made necessary by the severity of the country’s third coronavirus (COVID-19) wave, officials said on October 9.

“Due to the large number of coronavirus outpatients and patients, hospitalisation of non-emergency patients is not allowed until further notice,” Deputy Health Minister Iraj Harirchi was quoted as saying by Iranian media including semi-official news agency Mehr.

It is the first time since the start of the pandemic that Iran has issued such an order.

Tehran is still facing the brunt of the third wave of the virus. Schools, mosques, shops, restaurants and other public institutions in the capital closed for a week on October 3 and the governor on October 9 extended the closure for another week.

Masks, which had been compulsory in public indoors, must be worn anywhere in public in Tehran from October 10.

Iran’s Health Ministry registered 195 deaths of patients with coronavirus on October 10, taking the official death toll to 28,293. There were 3,875 new cases, bringing the total to 496,253. State television said the virus had now killed nearly 1,700 people in one week.

Nagorno-Karabakh ceasefire brokered by US frays after minutes

It took just minutes for the third attempt at a humanitarian ceasefire in the Nagorno-Karabakh conflict to fray on October 26, with Armenia and Azerbaijan accusing each other of violating the truce ... more