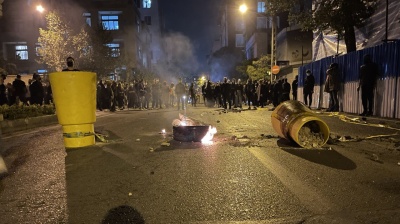 Unrest continued in Iran on the 40th day anniversary of the death of Mahsa Amini. / social media.
By bne IntelliNews October 27, 2022

Iran’s president on October 27 vowed security forces would give a "crushing response" to those who organised an attack by three gunmen that killed at least 13 people at a top tourist site, Shah Cheragh mausoleum in the southern city of Shiraz.

"This will definitely not go unanswered, the security forces and law enforcement agencies, having revealed the reverse side of the crime, will give a devastating ... answer to its organisers and perpetrators," said the president, Ebrahim Raisi.

Officials said that two children were among the victims and that the number of those injured was around 40. Two of the attackers were detained and a hunt was under way to find the third. The attack was claimed by Islamic State in a statement posted on the terror group’s Telegram channel.

The attackers—whom official news agency IRNA described as “takfiri terrorists”, a label used by officials in predominantly Shia Muslim Iran to refer to hardline, armed Sunni Islamist groups—struck on the same day that Iranian security forces opened fire in clashes with mourners who were marking 40 days since the death of Mahsa Amini. The 22-year-old died while in the custody of Tehran’s “morality police” facing claims that she was wearing “inappropriate attire”. The death of Amini sparked protests that have grown into nationwide anti-government unrest that has lasted almost six weeks.

The mourners had gathered for a memorial ceremony called for Amini in her hometown of Saqqez in Iran’s Kurdistan province. Semi-official news agency ISNA said around 10,000 people had gathered at the town’s cemetery.

Anxious that the final day of the traditional 40-day period of mourning would ignite further protests, security police warned Amini’s family not to hold a memorial procession, otherwise their son would be arrested, rights groups claimed. It was not clear whether members of Amini's family were present at the memorial event. A source close to the family told the BBC that intelligence agents put pressure on the father to say that they were not holding a ceremony.

Available evidence—accessible despite Iran’s blacking out of the internet—indicated gatherings and protests occurred throughout the day and into the night on October 26 in Iran. Universities were again the scene of much protest action. The death toll amid the unrest is thought to stand above 200, according to several human rights groups.

Radio Farda reported on how anti-regime street art has become an important part of dissent for protesters. The 1500tasvir social media channel said that there were strikes in some cities, including Tehran, Rasht, Isfahan and Kerman but added that it was difficult to ascertain evidence of them online as "the Internet connection is too slow."

Berlin commended the bravery of the protesters. The German Foreign Office tweeted: “The courageous protests in #Iran continue. Day by day the regime acts more brutally. Our bilateral relations [with Iran] were already at a low, but with a state acting so inhumanely, there can be no ‘business as usual’. Therefore, we adapt our relationship to the situation.”

It added: “We are preparing further EU human rights sanctions & we are looking into listing family members of those responsible. Nationally, we will restrict visas for official passport holders and tighten entry regulations for members of EU-listed organizations.”

Meanwhile, Canada’s PM, Justin Trudeau, said: “Today marks 40 days since the death of Mahsa Amini. I would like to say to the Iranians and those who took to the streets in other countries: we support you, we hear your calls to action.”