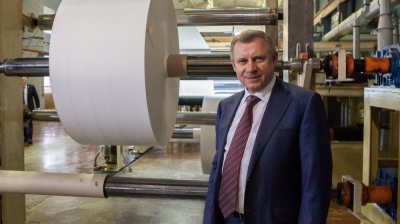 Ukraine has some $17bn of debt to pay this year, but following the departure of NBU governor Smolii the capital markets are temporarily closed to it
By Ben Aris in Berlin July 3, 2020

Ukraine’s Rada rapidly accepted the resignation of Governor of the National Bank of Ukraine (NBU) Yakiv Smolii on July 3, completing the process of his departure from the central bank.

A crisis is brewing as a result. The uncertainty Smolii’s departure has created has temporarily closed its access to the international capital markets, where it needs to borrow billions of dollars this year to repay some $17bn in debt obligations. Debt redemptions will rise to UAH600bn ($22bn) in 2021. And Ukraine’s total external debt is anticipated to rise to 93% of GDP this year before falling again to 84.6% in 2021 and 77.9% in 2022, according to IMF estimates.

At the same time, it puts the freshly signed $5bn standby agreement (SBA) deal with the International Monetary Fund (IMF) in danger, which also plays a key role in Ukraine’s funding plans. Without either of these sources of money the country will have to, at best, draw deeply on its meagre hard currency reserves that will destabilise the value of the hryvnia, or, at worst, lead to default on its debt and economic disaster.

The Rada vote was the last step in the formal process of letting Smolii go. Ukrainian President Volodymyr Zelenskiy had already accepted Smolii’s shock resignation, which he announced late on July 1.

“I would like to thank all NBU employees and all our partners and clients who followed the path of reforms with us. I’m leaving with my head held high. And I leave the NBU under your responsibility,” Smolii said in tweet to his colleagues at the central bank.

Earlier the board of directors of the bank said in a statement they would stay on and continue the reform work and prudent monetary policies Smolii, and former NBU governor Valeriya Gontareva before him, had been pursuing.

The departure of Smolii threatens to cause a fresh crisis for Ukraine. The bank’s independence has been under attack from oligarch Ihor Kolomoisky, who is lobbying to regain control of PrivatBank, which was nationalised in 2016. The IMF insisted as part of its recent SBA deal that the government pass the so-called anti-Kolomoisky banking law before a new deal could be signed. The law passed and a new $5bn SBA was confirmed on June 9. However, in its memo accompanying the announcement, the IMF made it explicit that the NBU’s independence is not to be touched, as bne IntelliNews reported in comment “Here is the money but we don't trust you.”

Smolii’s departure now threatens the IMF deal, as the multinational lender is unlikely to release any more tranches until it is clear the new management at the central bank will stick to the same market friendly policies as the outgoing management. In the meantime, the bank will be run by Smolii’s deputy Vladyslav Rashkovan, who is not well liked in the Rada for being a driving force behind PrivatBank’s attempts to recover $5.5bn stolen by Kolomoisky through the courts.

Ukraine has some $17bn of debts to repay and the IMF funding is a crucial element of those repayments. But even if the IMF deal can be kept on track, the mere uncertainty caused by Smolii’s departure cause by itself lead to a shortfall in funds, and then to default and disaster.

On the same day that Smolii quit, the Ministry of Finance has just closed the order book on a $1.75bn 12-year Eurobond issue that was going to be used to roll over some of the $3bn worth of debt that will mature in the next few months.

However, at the news of Smolii’s resignation the bond issue was pulled. One of the appeals of the Ukraine story is the sterling management of the monetary policy from the NBU that has, among other things, brought inflation down from over 60% in 2015 to 1.7% in May – its lowest level ever.

Only a week earlier the Ministry of Finance offered to buy back its Eurobonds maturing in September 2021 and 2022 at 103.5% and 104.2% of par respectively. The total indicative amount that the government is going to purchase is $0.75bn (excluding accrued coupons). And this deal was going to be financed by those new 12-year Eurobonds. Currently, there are $1.409bn of 2021 notes and $1.384bn of 2022 notes outstanding.

The international capital markets are now closed to Ukraine until it can find a creditable replacement for Smolii. And in a double whammy, the local debt market could be closed too. Ukraine’s Ministry of Finance hryvnia-denominated OVDP treasury bills (OVDP) became available to international investors when the local debt market was hooked up to the Clearstream international settlements and payments system. Over $5bn of new investment flowed into the market over the next year, becoming an important source of new funds for the government.

However, this week’s auction of local bonds flopped, attracting less than $50mn, and investors have been selling off their OVDP holding since the crisis months and their share of outstanding bonds has fallen to 11.9% from a peak of 15.7% in February, just before the wave of crises hit. The selling is not a rout and foreign investment in the OVDPs remains significant, but clearly the appetite for the bonds, which were selling like hot cakes until February, has clearly evaporated for the moment.

Without either the IMF tranches or fresh investment into the OVDP market the Ministry of Finance will have to pay off debt using its meagre hard currency reserves.

Ukraine’s gross international reserves declined 1.3% month on month to $25.4bn in May after increasing 3.1% m/m in April, the NBU reported on June 5. The decline was mostly due to significant redemptions, including the servicing of international and local Eurobonds worth $1,009mn and $338mn respectively. Since then, Ukraine received another $500mn from the EU, taking the reserves up to $28.7bn as of June 12, which was released after the SBA deal was done, but that is still only 4.5 months of import cover. Economists believe that a country needs at least three months of import cover to ensure the stability of the currency.

The increase in reserves again can be laid at Smolii’s feet, as the NBU has managed Ukraine’s limited reserves well and even managed to increase them during these crisis months to give the bank nearly $3bn of wiggle room before the three-month lower limit is hit, but that is not enough of a margin to get through 2020 without outside help.

“Ukraine has large debt repayments coming up. Recent failure to issue on international markets and renewed uncertainty regarding the IMF programme as a result of the political pressure on NBU will require larger reserves drawdowns,” Elina Ribakova, deputy chief economist with the Institute of International Finance (IIF), told bne IntelliNews. “Access to international markets, moderate inflows to domestic bond market and an IMF programme were all critical ingredients to keeping Ukraine’s FX reserve loss under control. After Smolii’s resignation these are all in doubt.”

The IMF was already predicting that Ukraine’s reserves were going to fall by $6bn this year to $19.3bn before Smolii quit, which would take Ukraine to below the three-month import cover level and lead to a devaluation of the hryvnia.

The third quarter is just starting and Ukraine has almost $5bn of debt to repay before the end of September, more than the $3.5bn it just dealt with, but currently it has no new sources of funding, as the next tranche of the IMF money is not due until the autumn.

And to add to the pressure, the government has committed itself to a big anti-coronacrisis spending programme that will treble the budget deficit to 7.5% of GDP, which will also have to be funded with fresh borrowing.

The third quarter of this year is going to be particularly difficult, and with another circa $3.2bn to pay in the fourth quarter that will not be easy either. The bottom line is Zelenskiy needs to find another competent person to lead the NBU to reassure investors and so reopen the markets. Of course the best option of all would have been to quell the attacks on the NBU by Kolomoisky, take a principled and clear stand on the independence of the NBU and not to have lost Smolii in the first place. 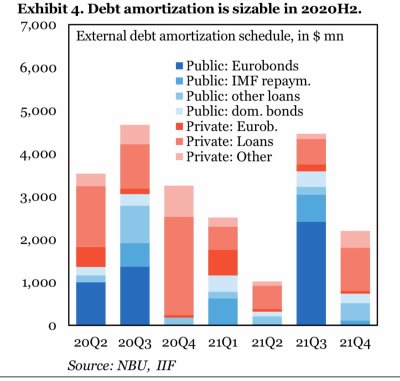 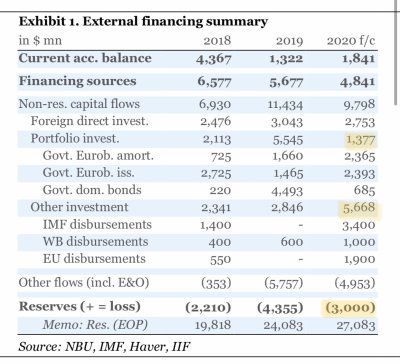