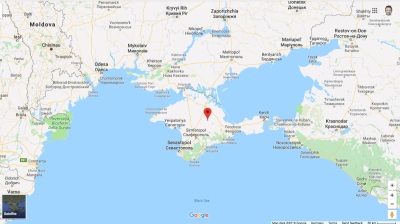 Google maps shows a Russian border between the Crimea and Ukraine
By EWDN in Moscow March 12, 2019

Five year after Russia took control of the peninsula, the sovereignty dispute between Russia and Ukraine over Crimea is still sensitive for online service providers, reports East-West Digital News (EWDN).

Thus, in an effort to comply with local laws regarding the depiction of international borders, Google has just “corrected an error that caused a small number of Russian iOS users” to see Crimea as part of Ukraine, as reported by online publication Meduza.

Members of the Russian parliament, including State Duma Speaker Vyacheslav Volodin, had criticized Google over the past two months for what they saw as an “unconstitutional” inaccuracy.

In a meeting with Duma officials, Google’s government relations director in Russia Marina Zhunich attributed the issue to a technical error without any political significance, as reported by the TASS news agency.

Under fire from both sides Since 2014, as Ukraine still claimed its sovereignty over the peninsula, map publishers, search engines, and a range of other organizations have come under fire from both Ukraine and Russia depending on whether they attributed Crimea to one or the other.

In 2016, a controversy sparked over Google’s decision to change the names of Crimean settlements appearing on Google Maps, in accordance with the Ukrainian authorities’ “decommunization” campaign. Google’s moves unleashed a flurry of criticism from Russian and Russo-Crimean officials, after, which the US company restored the previous names in both the Russian and the Ukrainian versions of Google Maps.

The sovereignty dispute over Crimea and its legal implications also led several international companies to suspend activities in the peninsula. So did Apple, Google, PayPal and other US tech giants as early as 2014. Thus, Crimean gamers were locked out of playing popular online multiplayer games, as their US publisher was forced to suspend the accounts in compliance with Western sanctions.

However, in May 2015, the US administration allowed American companies to continue providing Crimean users with a range of free online communications services.

In 2016, nevertheless, Ukraine sued Booking.com for operating continuously in Crimea. That same year, Russian authorities threatened to ban to ban Trip Advisor, whose website still displayed Crimea as being Ukrainian territory, from operating in Russia, as reported by East-West Digital News.

In late 2015, Russian patriots felt offended when Coca Cola posted a greeting card on Vkontakte, the leading Russian social network, showing a map of Russia without Crimea and two other peripheral territories. The community moderator apologized and posted an amended map.