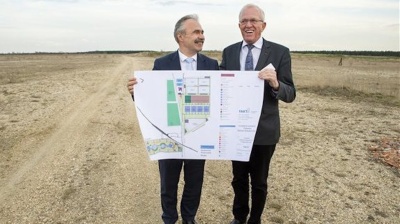 Germany’s FAKT AG group is planning a landmark agribusiness project in western Hungary which in value would be among the highest on record and comparable to large greenfield investments by Audi and Mercedes, local media reported on March 26. The investment will create 5,000 jobs.

Essen-based FAKT is building a horticultural production, processing and logistics centre on the outskirts of Hegyeshalom and Bezenye, near Hungary's borders with Austria and Slovakia on 330 hectares.

The location is in the area where a large-scale casino city project was supposed to start in 2006. Back then foreign investors won a 20-year license to operate casinos. Eurovegas was originally expected to open in 2010, but construction was delayed due to the economic crisis and later it was called off completely.

The German company chose the site due to its location on the Budapest-Vienna-Bratislava axis, offering outstanding infrastructure in both the north-south and east-west directions.

The investment is expected to create some 5,000 jobs, said FAKT AG chairman-CEO Hubert Schulte-Kemper. He described the project as the largest agricultural investment of its kind in recent times in Hungary, by which FAKT aims to produce and process vegetables and fruits in a modern, sustainable manner while creating a liveable working and dwelling environment around the site.

The project will also entail the construction of a kindergarten, an elementary school, a dual training centre, recreational facilities and residential property for the management and employees but also available to investors. The German investor also plans to cooperate in training, higher education, and research in the region.

FAKT is building a 300,000sqm greenhouse center, a 200,000sqm vertical garden, a 160,000sqm freezer, processing plant and a warehouse, and a 145,000sqm logistics centre. FAKT is also planning to establish the largest onshore fish farm in Europe.

To develop infrastructure for the €1bn project, FAKT has teamed up with Hungarian construction firm KESZ, which has been active in Germany for 15 years and boasts an impressive reference list, including the construction of the Puskas Stadium. The two companies also have a long track record of joint projects.

FAKT has a track record of project development with the focus on environmentally friendly solutions. It is in talks with E.On on creating energy infrastructure with the focus on renewable energy. Western Hungary is a perfect location for tapping wind, solar and geothermal energy, it said.

"We will create an integrated agricultural system that can be combined with production and recreational facilities," Schulte-Kemper said.

For retail and distribution, FAKT has partnered up with Landgard, which has good connections to leading European retail chains.