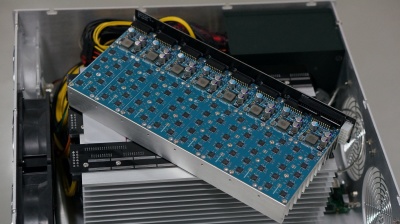 Georgia is now the world’s third largest Bitcoin miner, behind China and Venezuela. The scale of the mining pursued by the small country’s cryptocurrency farms is such that it is “sucking the power grid dry” as the enterprises account for some 10% of the country’s electricity consumption some estimates contend, according to a BBC Business Daily podcast “A hydro-powered Bitcoin boom in Georgia”.

The problem is reportedly particularly acute in Svaneti region, where consumers are exempt from paying for electricity because of harsh living conditions—the situation fostered the development of grey economy Bitcoin mining businesses “patronised by high-ranking officials” according to locals quoted by Kommersant daily. Frequent power outages are apparently endured by locals.

David Chapashvili from Green Energy, an environmental pressure group, was cited in the podcast as criticising the cryptocurrency mining practice for how much electricity it consumes.

A BitFury-owned Bitcoin mining farm is “guzzling” up 4% of the country’s electricity, or 389.7 million kWh in absolute terms, alone, according to documents presented by the Green Energy representative.

Chapashvili said the country actually has no understanding of the total impact cryptocurrency mining is having on its energy consumption.

“There are lots of micro-miners,” he said. “If you ask a very simple question to the ministry like which sector is consuming [energy] Georgia doesn’t have this kind of analysis.”

“Actually, in reality we don’t know what’s going on or how many consumers are [mining Bitcoin],” Chapashvili added.

The environmental pressure organisation is one of the groups that estimate that Bitcoin mining is using more than 10% of Georgia’s energy supplies.

“People were without power for almost a week because of Bitcoin mining that caused protests. We held talks with miners in one of the villages and agreed that they would stop working. But this can repeat tomorrow and the day after tomorrow,” governor of Mestia town in Svaneti, Kakha Zhorzholiani, said.

Georgia is a net electricity importer and experiences a deep seasonal power production deficit during the winter when its hydroelectric production capacities cannot cover demand. Placing cryptomining facilities near power plants to capture peak consumption would seem an option—but strengthening interconnections with Turkey and other neighbours from which electricity surpluses can be exported during the summer seems a much better option. Furthermore, even if the country holds massive hydropower capacities not yet developed, their development poses significant environmental problems.

Talking to the BBC, Georgia's Economy Minister Natia Turnava highlighted the country's electricity export potential. “We have ambitious plans for submarine high-voltage electricity cables that could unite Georgia's Black Sea coast with Europe's Black Sea coast. This is an idea and a good way to become more integrated into the European energy system, "the minister said.