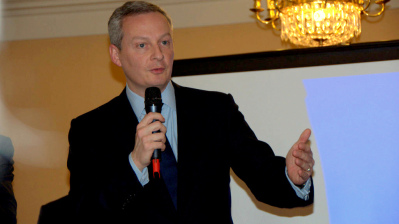 Le Maire said French companies staying in Iran would not be paid “because there is no sovereign and autonomous European financial institution”. / SmartGov.
By bne IntelliNews June 20, 2018

French Finance Minister Bruno Le Maire has conceded that many French companies will not be able to stay in Iran after the US imposes its new sanctions on the country, AFP reported on June 19.

His remarks will underline concern in Tehran that when it comes to fighting Washington's economic aggression towards the Islamic Republic, the EU's major powers have been rather too eager to talk the talk, but far from impressive when it comes to credible action.

France's PSA Group, the maker of Peugeot, Citroen and DS cars has already said it will wind down its joint venture activities in the country, while Renault has stated it will continue to keep its business in Iran open - even if downsizes to only a skeleton crew.

Meanwhile energy major Total, which has signed a multi-million-euro deal to develop part of the South Pars gas field in the Persian Gulf, has stressed it can only continue work in Iran with a waiver from the US Treasury, a very unlikely prospect as things stand.

The French companies “won’t be able to stay because they need to be paid for the products they deliver to or build in Iran, and they cannot be paid because there is no sovereign and autonomous European financial institution” capable of shielding them from the US sanctions to be rolled out following Washington's unilateral withdrawal from the multilateral nuclear deal, Le Maire told BFM television.

“Our priority is to build independent, sovereign European financial institutions that would allow financing channels between French, Italian, German, Spanish and any other countries on the planet,” Le Maire added. “It’s up to us Europeans to choose freely and with sovereign power whom we want to do business with,” he said.

Stressing earlier points made by other French officials, and backed up by EU leaders, Le Maire reiterated that Europe must stand up for its rights and sovereignty. "The United States should not be the planet's economic policeman."

The EU has been attempting to build a bulwark against secondary US sanctions concerning Iran which are likely to come into place in August. The UK, France and Germany have led the demand for the US to grant waivers against such sanctions for European companies, with no evident joy so far.