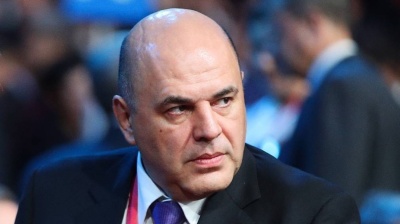 The Russian government underwent a mini-reshuffle yesterday that resulted in new leaders for five of its 21 ministries that strengthen PM Mikhail Mishustin control over the government
By FPRI BMB Russia November 11, 2020

The Russian government underwent a mini-reshuffle yesterday that resulted in new leaders for five of its 21 ministries. In short order, Putin announced the resignations of several ministers, after which PM Mikhail Mishustin proposed replacements. As per the new procedure established during this summer’s constitutional changes, the Duma approved Mishustin’s candidates today, and Putin officially appointed them by decree.

Here’s a rundown of the changes:

Transportation: Transportation Minister Yevgeny Ditrikh was fired, and will be replaced by Aeroflot CEO Vitaly Savelyev.

Environment: Natural Resources Minister Dmitry Kobylkin was fired and nominated for a position in United Russia Party's leadership. Kobylkin will be replaced at MinPrirody by the Minster of Far Eastern and Arctic Development, Alexander Kozlov.

Far East and Arctic: As Kozlov moves to MinPrirody, the head of the Fund for the Development of the Far East, Aleksey Chekunhov, will become the new Minister of Far Eastern and Arctic Development.

Construction: Construction Minister Vladimir Yakushev was fired and will become the new presidential envoy to the Ural Federal District. His deputy at MinStroi, Irek Faizullin, will fill his vacancy. 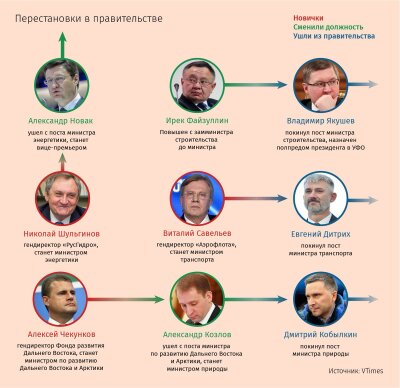 What do the personnel changes mean for the various sectors? Consensus is that the shake-up portends very few policy changes. Nevertheless, there are few interesting shifts to note.

Alexander Novak’s move to deputy PM is formally a promotion. He will take over the energy portfolio currently managed by Yury Borisov, the deputy PM responsible for defence. Government sources claim that Novak is being rewarded for successfully concluding the first OPEC+ deal in 2016 and for resolving the oil price war with Saudi Arabia this past spring. However, some analysts such as Tatyana Stanovaya and Nikolai Petrov note that while Novak has technically been promoted, his power has actually decreased. He loses the direct control over the energy sector that he had as minister.

Ultimately, Novak’s role will shift to become more strategic in his new position. Over the past few years, Novak has emerged as a de facto foreign minister, managing Russia’s relations with OPEC. In his new role, Novak will remain Russia’s point person for OPEC+, and his promotion should show the Saudis the importance with which Moscow views their relationship. Novak will also focus more on Russia’s broader energy strategy, devising how the country should respond to changing global conditions, such as a Biden administration that deprioritises US oil compared to the Trump administration.

Unlike his predecessor, Russia’s new energy minister, Nikolai Shulginov, is an energy guy through and through, having worked in the sector since finishing university. He’s considered a neutral figure who doesn’t belong to any of Russia’s big oil industry lobbying groups. And he may be temporary: sources say he’s been tapped to manage long-standing technical challenges that Novak (who didn’t have substantial energy experience) was unable to resolve. But Shulginov may not survive if there’s another government shake-up after next year’s Duma elections.

Dmitry Kobylkin’s dismissal as the head of MinPrirody did not come as a surprise. Under his leadership, the ministry has faced a series of environmental scandals – from the landfill protests in Shies to the historic Norilsk oil spill to the mass death of marine wildlife in Kamchatka. There are concerns among environmentalists, however, that his replacement, Alexander Kozlov, may jeopardise the delicate balance that Kobylkin achieved between respecting the demands of business and environmentalists. Under Kozlov’s leadership, the Ministry of Far Eastern and Arctic Development devised a strategy for developing the Arctic that gave massive tax benefits to companies – Rosneft chief among them. Kozlov is also a disciple of Yury Trutnev, a deputy PM and the presidential envoy to the Far East. Environmentalists fear that Kozlov will heed Trutnev’s desire to remove protections for certain national parks to please companies.

The replacement of Transport Minister Evgeny Ditrikh by Aeroflot head Vitaly Savelyev has more to do with shuffling Aeroflot’s leadership than MinTrans. For Savelyev, who ran Aeroflot for 11 years, the move is a demotion. Last year, MinTrans had RUB180bn ($2.32bn) budget – over three times less than Aeroflot’s revenue. Rumours have emerged about Savelyev’s impending resignation after every major Aeroflot scandal – the infamous fat cat incident, the catastrophic Superjet crash in 2019 and the arrest of Savelyev’s deputy for fraud last October, to name a few. For at least the past two years, there has been a perception within the presidential administration that Savelyev’s been in charge of Aeroflot for too long. Last November, RBC reported that Savelyev would find a cushy retirement as transport minister this past spring. However, the government delayed the move after the pandemic delivered a huge blow to Russia’s airlines.

How should we interpret the shake-up in the broader context of Russian politics?

Analysts have made two main observations about the reshuffle. The first is that it offered an opportunity to test the new procedure for appointing cabinet officials. According to this summer’s constitutional changes, cabinet officials nominated by the PM are now to be approved or rejected by the Duma before going to the president. (Duma speaker Vyacheslav Volodin laughably lauded the change as a transfer of authority from the president to citizens, who now have a say in cabinet appointments via their representation in the Duma.) Putin signed the relevant legislation codifying this change on Friday. No sooner had he done so, the reshuffle took place. Safe to say, the test run went very smoothly – all appointees were approved within one day.

The second point is that Mishustin is solidifying his position within the government, casting off hangers-on from the Medvedev era. The three ministers who were fired – transportation, natural resources and construction – were all appointed under the second Medvedev government in May 2018. When Mishustin’s government was hastily constructed after his surprise appointment in January, the new PM focused on building a team of trusted deputy prime ministers. Outside the social bloc, many cabinet officials remained unchanged from Medvedev’s government. Now the PM is fine-tuning the cabinet, replacing those he doesn’t want to work with and establishing his own apparatus independent of Medvedev’s. While everyone agrees that the personnel changes don’t represent any major policy shifts, they suggest that Mishustin is seeking to turn his attention back to revising the National Projects and delivering on Russia’s socio-economic agenda after a year of fighting the pandemic.

Yet as analysts draw these conclusions, Andrei Kolesnikov offers a sober reminder: the big shake-up that just happened is not really politics. It is simply a reshuffling of replaceable technocrats. The dismissed officials were either promoted or they moved horizontally. And they are not politicians, but rather “functions,” whose only political quality is loyalty to the top. In this context, increasing speculation about the future of Mishustin and his political power is silly: at the end of the day, Mishustin remains more of a function than a politician, Kolesnikov argues. Because we all know who Putin’s successor is. It’s Putin.