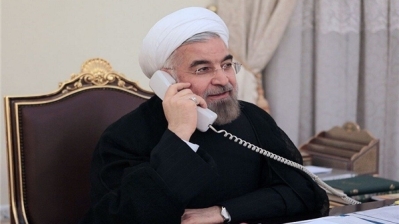 Iranian President Hassan Rouhani and Malaysian PM Muhyiddin Yassin on May 13 held a phone call during which they lambasted US sanctions against Tehran as a violation of human rights, especially during a pandemic emergency.
By bne IntelIiNews May 13, 2020

The sudden increases arrived with the secondary Forex Management Integrated System (NIMA) rate that is compulsory for exporters closing in on the tertiary rate, spurring bureaux de change to up their prices. Many investors are now investing in currencies as well as the booming Tehran Stock Exchange main index as the housing market remains stuck in deflationary mode. Iranian vice president Eshaq Jahangiri said on May 10 that US sanctions, the coronavirus (COVID-19) outbreak, the drop in oil prices and the woes of the global economy had caused “perilous conditions” for Iran’s economy.

The dollar reached its strongest rate against the Iranian rial (IRR) since September 2018 at IRR171,200, while the euro and pound sterling have also gained. The euro reached a several-month high of IRR185,850 while the GBP stood at IRR210,450. When the Iran nuclear deal with six major powers was signed in late 2015, the IRR was trading at 32,000 to the USD.

The gold market, meanwhile, has followed suit. The Azadi gold sovereign on May 13 hit IRR70mn while the Emami sovereign touched above IRR72.5mn.

The sharp movement of recent days seen on the free market prompted the Central Bank of Iran (CBI) governor to caution people to not play the markets, Tehran’s Financial Tribune reported.

"Despite restrictions caused by the outbreak of COVID-19,  exporters have managed to inject $2.5 billion into the secondary market in the past 50 days… Our observation indicates that the market is going to return to its previous state as trade channels reopen," Abolnaser Hemmati reportedly said.

On the currency market fixed to the CBI pricing mechanism, the euro gained while sterling fell. The former gained to IRR45,565 while the latter fell to IRR51,519.

The dollar, which remains ‘locked down’ in Iran as the country endures the latest era of heavy US sanctions, remained fixed at IRR42,000. Iran continues to remove the greenback from daily transactions, partly to help the economy get around the impact of the sanctions.

Iran’s economy is set to fall deeper into recession this fiscal year and foreign reserves were set to drop to $73bn by March, a loss of almost $40bn in two years, the Institute of International Finance (IIF) stated in January.