Foreign investors increased their share of Russian Ministry of Finance ruble-denominated OFZ treasury bills to 31.9% in 2019 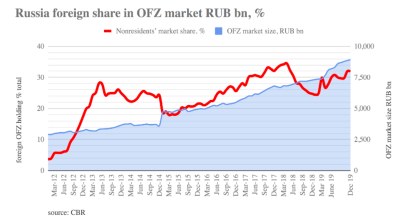 Foreign investors increased their share of Russian Ministry of Finance ruble-denominated OFZ treasury bills to 31.9% in 2019. The total volume of the T bills outstanding rose from RUB1,790bn in January 2019 to RUB2,850bn as of the end of December / bne IntelliNews
By Ben Aris in Berlin January 30, 2020

The Russian Ministry of Finance ruble-denominated OFZ treasury bills market continued to grow in 2019, with the total volume of the T-bills outstanding rising from RUB1,790bn ($28.3bn) in January 2019 to RUB2,850bn as of the end of December, according to Ministry of Finance data.

The RUB1,060bn of new bills the ministry issued in 2019 were heavily bought by foreign investors, which saw their share of outstanding bills rise to 31.9% of the total outstanding bonds, as of the end  of December, but still short of the all-time high of 34.5% set in April 2018.

The marked sell-off in OFZ by foreigners in the first half of 2018, which took their share down to a low of 24.4% in January 2019, has reversed, but the pace of growth has not been quite as fast as in the previous rally that ran between the start of 2015 and the summer of 2018.

The Ministry of Finance will continue issuing bonds at the same pace this year and the budget allows for up to circa RUB1,500bn worth of OFZ to be issued.

The domestic bond market got off to a good start in January 2020 with foreigners buying over $1bn of Russian securities. At the same time, domestic investors are actively buying, including a mystery buyer of RUB58bn ($932mn) worth of ruble-denominated sovereign debt in the third week of January. According to the Ministry of Finance, this was one of the largest fulfilled bids in history, with the purchaser buying nearly the entire issuance of OFZs maturing in November 2025 at the weekly auction.

“Onlookers are debating who the mystery buyer is. Consensus says it’s a domestic financial institution — otherwise the ruble-dollar rate would’ve moved, yet it barely reacted,” BMB said in a note.

However, as January came to an end the markets went into “risk off” mode on fears of the spread of the Wuhan avian flu that led to a general sell-off and profit taking.

“Russia’s OFZ market also went through a volatile patch due to global market jitters, in particular because of coronavirus concerns. Compared with last Friday, yields are up by 1bp to 6bp," Rosbank said in a note on January 30.

“We observe further steeping of the yield curve since the beginning of the year. The 10Y-2Y spread is at 68bp and the 10Y-5Y spread is at 37bp now. It seems that many market participants are comfortable to add bonds at the front part of the curve – but while selling the back end. The ‘Russia reflation’ trade based on the recently announced boost in government spending seems to drive the move,” Rosbank added.

This article is from bne IntelliNews Russia monthly country report. Sign up to receive the report to your inbox each month, which covers the slow moving macro- and micro-economic trends, the major political news and a round up of the main sectors and corporate news. First month is free and you can unsubscribe at anytime.