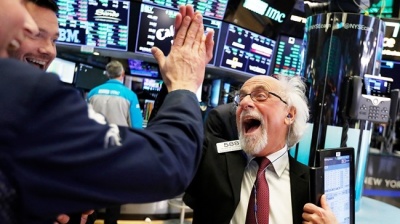 Foreign investors have poured more than $1bn into Russian assets since the start of the year
By bne IntelliNews January 27, 2020

Since the beginning of 2020 foreign investors have brought over $1bn into Russian funds, with two funds accounting for most of the equity inflows, Kommersant daily reported on January 27 citing the reports by the Bank of America and BCS Global Markets based on Emerging Portfolio Fund Research data.

Apart from EPFR-tracked inflow into equity and debt funds, four Russian issuers have already placed $1.6bn worth of Eurobonds in 2020, while the Finance Ministry has placed RUB145bn ($2.3bn) worth of OFZ federal bonds.

Indeed, yet another mysterious buyer bought RUB58bn ($932mn) worth of ruble-denominated sovereign debt last week. According to the Ministry of Finance, this was one of the largest fulfilled bids in history, with the purchaser buying nearly the entire issuance of OFZs maturing in November 2025 at the weekly auction.

“Onlookers are debating who the mystery buyer is. Consensus says it’s a domestic financial institution—otherwise the ruble-dollar rate would’ve moved, yet it barely reacted,” BMB said in a note.

There have been several mystery large deals in Russian equity in the last few months. Last week Gazprom admitted that its investment arm Gazprombank was behind the $5bn SPO of a 6.52% stake in the company. Speculation has been rife that the stake was sold to someone in Russian President Vladimir Putin’s inner circle, one of the so-called stoligarchs. There were several reports that billionaire businessman and Putin confident Arkady Rotenberg bought the shares, and that still might be the case if Gazprom bank was acting on his behalf.

And in October shares in oil major Surgutneftegas leaped by 31% in a day to set a new all time high for no apparent reason, say market participants, who speculated insiders were buying ahead of some large announcement that is in the works, like a merger with Lukoil or granting investors access to the company’s $50bn cash pile.

“While markets were welcoming the year-end Santa rally and January EM optimism, the Coronavirus fears with potential impact on China, the dominant EM, may have already seriously damaged sentiment in the last few days - much depends on further developments,” BCS GM warned.